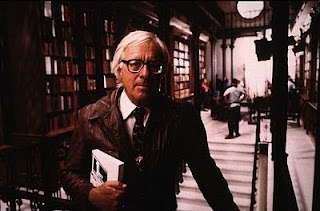 "I spent three days a week for 10 years educating myself in the public library, and it's better than college." — Ray Bradbury

Not nearly as dedicated, talented or prolific, I nonetheless identify with Mr. Bradbury’s comments. Like most people, I’ve lived through periods of my life where I’ve had greater and lesser financial security. But I will never forget the years I lived in a studio apartment at the Ambassador on Ninth and Pennsylvania in Indianapolis.

I had just returned from a stint in the Army, had very little money, but wanted to spend my time writing. The city’s Central Library was, for all practical purposes, in my backyard. I could see the back of the stately building from my window. I spent hours there, wandering around the beautiful balconies, up and down the grand steps and into and out of the various rooms. Spending hours amidst all those books reinforced my belief that knowledge is important. I spent a lot of time in the stacks discovering authors who taught me about philosophy, literature and the cultures of other places in the world. The place made me feel rich even when I went home to my single-room apartment for a dinner of bologna and eggs.

Now that the national economy is struggling there are calls for cutbacks in city services. Libraries are having their budgets cut and that usually means closing library branches, reducing hours and cutting back on staff, not to mention books. However while we steal from valuable public resources, ones that enrich the community, the handsome salaries and pensions for legislators (city, state and national) continue. A U.S. senator, after one term, can receive a couple of hundred thousand a year for the rest of his or her life, which often means they can add that to the millions they will get as lobbyists, having an inside track to lawmaking as they do. The specific public resource available to those struggling at the lower end of the huge income gap — but who are determined to learn and improve their lives — is being choked.

I don’t know much about his private life, but I suspect Mr. Bradbury hasn’t had to worry much about money most of his long life. He is 91. What I do know is that he wrote many great books and provided inspiration and knowledge to millions. Where would he and so many others have been without a library? Where would any great civilization be, for that matter?