Film Pairing — The 1970s, Mods, Rockers and Men Without Navels 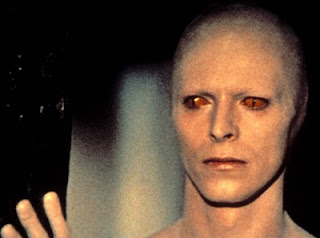 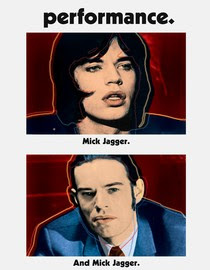 If I told you I’m recommending two films, each starring an iconic rock star, you might think that I had gone off my crime-fiction rails or that I was focusing on films so bad, they were good. Not true. Director Nicholas Roeg made a film in 1970, Performance starring Mick Jagger and another in 1976, The Man Who Fell To Earth, starring David Bowie. They were good then, though hardly mainstream, and it appears that, put in the context of their times, they are well worth watching now.

Among other things, Performance is a crazed, dark, violent, arty and druggy gangster film. It is vintage 1970s; but not the same '70s earlier described in the Frank Sinatra/Tony Rome double feature. Co-directed by Donald Cammell, and also starring James Fox, Performance could easily be the regular Saturday midnight movie for those who have finally grown weary of the much more light-hearted Rocky Horror Picture Show. While the mood is entirely different, there are a surprising number of similarities.

I must like moral tales because Man Who Fell to Earth has, in my mind, much to teach us. In addition to Bowie, Rip Torn and Buck Henry star in the film about a creature who comes to earth, not to harm it, but on a self-less mission to help his fellow beings back home. His work must be done in secret because the fear of aliens would likely cause his capture if not his death, which, in turn, would doom his planet. The unfortunate result of his taking a human form is that his transformation becomes too successful.

In these two films, the roles played by Jagger and Bowie are ones they seem meant to play. The characters appear to be extensions of the stuff of their own iconic celebrity.

Thinking about what to serve with the double feature, I’d like to call your attention to the mushroom scenes in Performance. Or you can take a hint from the alien’s alcohol addiction. I believe I recognized a Beef Eaters bottle.

Posted by Ronald Tierney at 8:45 AM

This Nic Roeg interview may interest you ...

Thanks Paul. I remember loving Walkabout. I'll have to put Don't Look Now on the Netflix list. The interviewer included Roger Corman and Ken Russell as similar filmmakers. I'll have to educate myself on Corman; but I have seen almost all of Ken Russell's films (long ago) and loved them even when I was the only person in the theater. Again, thanks for the reference.