Book Notes — Thoughts Of A Voyeur 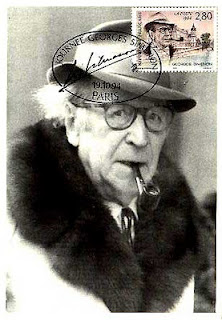 When it comes to book collecting, I wouldn’t even qualify as a dabbler. But over the years I’ve had a few brief but passionate obsessions, which led to pitifully small and erratic collections of the works of a few out-of-the-mainstream authors I admire. Among them are James Purdy, Paul Bowles and Robin Maugham, Somerset’s nephew. None of this was done with the eye of an investor. These are books of various editions, bindings and wear — whatever I could find and afford.

About ten years ago and over the course of a few months, I picked up a dozen or so Georges Simenon books — all novels that did not feature the famous Commissaire Maigret, a legendary mystery series character I never warmed to. However, I thoroughly enjoy Simenon’s other, strange little novels. I say “little,” and I mean that in more than just number of pages. They are, in fact, typically short and the narratives are straight forward, unembroidered. The novels are driven more by character than plot. And in the end, they are mostly “little” tragedies. These aren’t about grand figures suffering great falls. Instead, they are based on more ordinary people taking wrong turns. In essence whatever happened to them could happen to any of us.I was reminded of this earlier infatuation with Simenon because of a story in a recent New Yorker. The writer not only discussed Simenon’s Olympian sexual exploits, but also touched on his failure to achieve the literary status he craved because the frequently lurid nature of his work put off the literati in charge of honors. I dug out my stash of his old books. A few of them are first U.S. editions and in pretty good condition. But the one I remember the most was one I read all those years ago in a tattered paperback. The title is November. It seems unlike anything being written today — or at least anything I’m aware of, though hardly lurid by today’s standards — and certainly not that big blockbuster of a novel that publishers yearn for.

At any rate, November is a great little book with a great little story. Don’t take my word for it. The St. Louis Post Dispatch said: “If you don’t know Simenon at all, this is the place to start, where he’s in absolutely top form.” Newsday said that Simenon has written a “ . . . fascinating and highly literate mystery story with tremendous psychological overt ones." 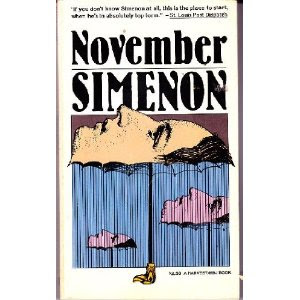 I’ve just reread it. Most of it takes place in a dark and gloomy little house in Paris. The house is occupied by an emotionally distant father, a paranoid alcoholic mother, a passive daughter who would escape it all if she had an ounce of ambition, a passionate but ineffectual son and… and the cheerful housekeeper who, as she brings a little life to the broodingly inert family, unwittingly, it appears, pokes the festering wounds.

Reading Simenon’s standalone novels, much like stories from the not quite obscure novelists mentioned above and the more recognized Ian McEwan’s early novels, makes me feel as if I am eavesdropping on real life — getting a glimpse of those things I am not supposed to see, people with their guards down, exposing the kinds of vulnerabilities and flaws that make us human. These books remind us that we live in our own little worlds, create our own, little realities. Here the narrator, the daughter, makes an observation:

“Walking in the streets, I have always been impressed by the thought that everybody one sees is the center of his own universe and that his preoccupations loom larger than what is happening in the world around.”

I can enjoy epic novels and films that span generations, the stories that make us feel a part of the great unfolding, where the characters become our friends and connect us to universal truths. However, the stories that appeal to me most are the small, intimate stories that one catches on the other side of the keyhole, stories about people escaping the confinement of the small worlds they have largely imposed upon themselves. Finally free for a few moments from their programmed personalities, they strike out. The results, however, may not be pretty.

Each of us, Simenon seems to say, is a lost soul in our own little world. These souls might be boring and ineffectual, or fascinating and frightening, full of hope or despair, passionate or phlegmatic; but escaping the consequences of our natures, repressed as they might be, is nearly always impossible.

Posted by Ronald Tierney at 8:22 AM