OLD GOLD — P. B. Ryan's First Gilded Age Mystery Back In The Limelight 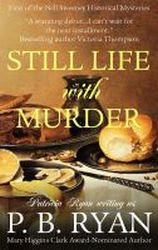 Early works by some of our best, current crime writers have been out of print for years. But times are changing. Many of these highly praised novels are available again as e-books and or trade paperbacks. “Old Gold” is a periodic blog feature that focuses on these reissued treasures. Here's P.B Ryan’s story in her own words.

“Six historical mysteries featuring governess Nell Sweeney.” That was what it said on the contract Berkley Prime Crime sent me in August of 2002. Yes, it was a six-book contract. Berkley had no intention of letting me slip the noose, and I was fine with that — thrilled, in fact. After years of writing medieval romance —always heavy on my first love, mystery and suspense — I was finally going to get to write real, honest-to-God whodunits. Historical whodunits, no less, set in post-Civil War Boston.

Urban historical settings have always fascinated me, especially 12th century London and 19th century...well, any 19th century American city. Barbara Hambly’s brilliant Benjamin January mysteries, which take place in New Orleans in the 1830’s, were a major influence on me, but being a northeasterner myself, I knew I wanted either New York or Boston. Since Berkley already published a successful series set in New York, Boston it was.

My friends call me “the Research Slut,” with good reason, because I absolutely do not know when to stop. When I choose a particular era as a fictional setting, I need to learn every freakin’ thing there is to learn about life in that time and place. I’m not talking about historical events, although they do figure in, of course. I’m talking about how things looked and smelled and felt, how people thought and talked, what they wore and ate and cared about. I spend months documenting what I learn from books and the Internet, and then I use about 1% of it in any given book.

My biggest pet peeve with historical fiction is that it can come off as pedantic, with info dumps that yank you repeatedly out of the story, making what should be an engaging work of fiction feel dull and slow. From the first book of the series, Still Life With Murder, I sought to create a world my reader could truly get lost in. My favorite letters from readers are the ones that say, “I was awake till 2:00 am finishing this book, and then I immediately started the next one.”

If I can ruin someone’s sleep, I consider it a job well done.

For more information on P.B. Ryan and her books, please click here.

Posted by Ronald Tierney at 7:53 AM