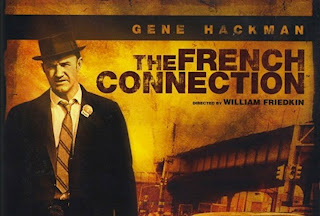 There was a period in American cinema when a thrilling crime film meant stringing together a series of wild car chases. Oops, that time never ended. But it may have begun in 1968 with Bullit, which had one brilliant chase scene around and over the hills of San Francisco.  The French Connection came along three years later with a classic chase that seems to one up the climactic scene in Bullit.  This time we have another classic chase, with a cop in a ’71 LeMans trying to keep up with a speeding and eventually out-of-control elevated train. These two films went a long way to seal the fame of two fine actors — Steve McQueen as Bullit and Gene Hackman as “Popeye” in The French Connection.

The French Connection has the more complex plot and, perhaps because of this, takes a little time to take off.  We start in sunny, seedy and scenic Marseille, the city we all suspect is France’s center of illicit activities. We eventually find ourselves in New York, where there is a shortage and consequently a hungry consumer demand for heroin. Based on a true story recounted in the novel by Robin Moore, a couple of second-rate cops want to bring down a clever narcotics chieftain. Director William Friedkin brought this kind of dark film from a stylish and perhaps mannered noir to a gritty realism — or at least the realism as it is perceived in the 1970s. No heroes here.  Just a thriller that builds to an end that is both frantic and mad.  The film won several Academy Awards and nominations including wins for Hackman and Friedman. Roy Scheider was also nominated for Best Supporting Actor. 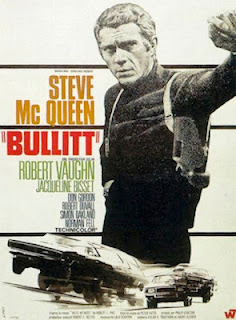 You can credit or blame Bullit for making the car chase as big a deal as it is? And who knows how many Ford Mustangs it helped sell?  Like The French Connection, Bullit was both a critical and box office success.  It had a few Academy Award nominations as well.

A smarmy, pompous D.A., played to a tee by Robert Vaughn, calls on San Francisco Police Lieutenant Frank Bullitt, played with admirable restraint by Steve McQueen. Respected cop, McQueen, is ordered to guard a key witness before he testifies in a high-profile trial of a dangerous man.  It all goes wrong in a hurry and the D.A. wants Bullit’s head.  Bullit thinks there’s something fishy about the whole thing. The story is tight and told quickly — downright breezy compared to the first on the bill.  The pay-off is the car chase on the streets of what may be the hilliest city in the country.  Peter Yates (The Friends of Eddie Coyle) directs.  The film is based on the book, Mute Witness, by Robert L. Fish, who was twice awarded an Edgar by the Mystery Writers of America.

Hackman, in his role, drinks whiskey on the rocks when he’s at a bar and straight from his flask when he isn’t. But we do have these characters from France.  They drink red wine. And while Bullit probably doesn’t consult the Wine Spectator for wine selection advice, he is in San Francisco and appears to like wine more than your average homicide cop.  So keep those facts in mind when you decide how you want the evening to go.

Posted by Ronald Tierney at 8:21 AM