Many, though not all of my books are available in all readable formats, Recently, several of them have been made for your listening pleasure as well. The two mystery novels below are now available through Audible. 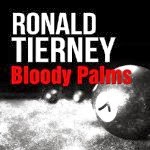 Bloody Palms — When 70-something Indianapolis PI Dietrich “Deets” receives a call from Jack Wenders, his former commanding officer in Korea, inviting him to Mexico to discuss a case, Shanahan accepts. But Wenders’ shadowy tactics put Shanahan on his guard — and for good reason. Wenders has become involved in a private security force that operates lawlessly across borders, without boundaries or limitations. Before he knows it Shanahan’s trip to sunny Puerto Vallarta turns dark and devious. And just about everyone in his life — including his tough and funny long-time girlfriend, Maureen — is in jeopardy. Narrated by Ric Jarrom
"Another solid performance from a savvy writer..." — Kirkus Reviews
"Ron Tierney has a gift for keeping the reader at a high level of curiosity and suspense." — Deadly Pleasures
“… another fast-paced crime adventure…. Tierney’s spirited writing, snappy dialogue, and wry wit add the final touches to this entertaining read.” — Booklist 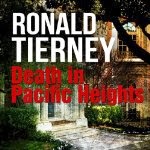 Death in Pacific Heights — A turn of events, personal and professional, causes Carly Paladino, a high-ranking investigator for a large and prestigious San Francisco security firm, to reevaluate her life. She decides, with uncharacteristic impetuosity, to strike out on her own. Her first job involves the death of the young daughter of an old and moneyed Pacific Heights family. An itinerant young man has been arrested for the murder, but Carly sees things that make her wonder if the murderer is really someone inside the Hanover mansion.  Narrated by Katherine Fenton
Noah Lang worked for a lobbyist who believed his wife was having an affair. While Lang is staked out at lobbyist's home, the woman kills herself — at least that's what the police think. Lang isn't so sure and wonders if he was hired to provide an alibi for a murderous husband.
The dead wife’s case haunts him, even as he is brought in to the Hanover case by the accused’s defense attorney, working at cross purposes with his future partner.  The first novel in the series brings a new and a colorful cast of characters to life, including the city itself.
“Tierney, author of the Deets Shanahan series, has a winner here.” — Library Journal

Posted by Ronald Tierney at 1:18 PM