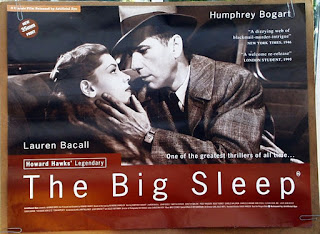 Friday’s double feature presents an opportunity to compare the performances of two legendary actors as they play one of the two most famous American private eyes in literature and film. Both played Raymond Chandler’s famous creation, Phillip Marlowe, in versions of The Big Sleep.

Of the seven actors who have played him on the big screen — Dick Powell, Humphrey Bogart, Robert Montgomery, George Montgomery, Elliott Gould, James Garner and Robert Mitchum — two set the standard. While I know there are those who would disagree. Some point to surprisingly excellent performances by Elliott Gould and Dick Powell. James Garner in the role also has fans. It still comes down to Bogart, who surprisingly played Marlowe only once, and Mitchum, who did it twice.

The story follows Marlowe, in the employ of a rich old man, General Sternwood. Marlowe is hired to stop a blackmailer who is about to reveal embarrassing photo 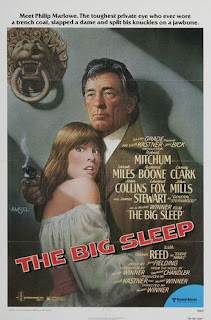 graphs of one of the General’s two wild daughters. The blackmailer is murdered, but that only complicates the situation, and Marlowe has a bigger job. He needs to find both a missing husband and a murderer.

I’m really a contrarian at heart, so I wanted to go against conventional wisdom and like the Mitchum version better. Not so. The old black and white Humphrey Bogart film is far superior in almost every way. Sometimes Robert Mitchum’s seemingly effortless acting is good. He never overplays it. Here a little effort might have paid off. He’s almost phoning it in. Sarah Miles, playing Sternwood’s older daughter, is down right ditzy and can’t hold a candle to Lauren Bacall’s smart and sexy characterization. Martha Vickers, in the older film, plays the crazy younger sister and she does crazy far more believably than Candy Clark’s feeble, flailing attempt. There were some great moments in the later version. Watching Richard Boone and Oliver Reed as heavies was a pleasant surprise. And the cars. Great automobiles.

Humphrey Bogart, at 46, was a little older than Chandler’s Marlowe, who was described as 33 by the author. Mitchum was 60 when he played the shamus. However, Marlowe was supposed to be tall and well-built, more like Mitchum and not at all like Bogart who was short and thin. No surprise here. This is Hollywood. There is word that the diminutive Tom Cruise will be playing the 6’5” brute, Jack Reacher, on the big screen.

Those were not the only differences in the two films. The Bogart version was in black and white, took place in L.A. (though director Howard Hawkes didn’t take much advantage of the location) and in roughly the timeframe the book was written. The Mitchum version was in color and for some unknown reason took place in late ‘70s London, which might explain Sarah Miles hair. The changes didn’t add anything.

Despite the later version’s shortcomings, it’s difficult to ignore a movie based on P.I. fiction by one of its founders. If you find my comments on the Mitchum film too off-putting you can substitute one of the other films based on Marlowe. The character was also featured on HBO, the BBC and on other television and radio shows. He was portrayed by many different actors. For the best online information on fictional private eyes, including writer Raymond Chandler and his character Marlowe, go to The Thrilling Detective.

Another option is to pair the Bogart version of Chandler’s Marlowe with Hammett’s Sam Spade also played by Bogart in The Maltese Falcon, thereby putting the top two American private eyes up against each other.

If you choose the both versions of The Big Sleep, watch the Mitchum version first and finish with the classic. To accompany the films, tonight, we come back to Bourbon, I think. Most of the characters in both films drink it straight — not even on the rocks. General Sternwood would have suggested brandy, and perhaps recommended that it be poured into a glass of champagne. In the Maltese Falcon, Spade goes down with a mickey in his brandy.

I watched the Robert Mitchum version over the Thanksgiving break. I hadn't seen it since it originally came out. I was disappointed. It wasn't sinister in modern-day London. And it didn't have the grit of the book or the Bogart movie. Although, I did like the suits Mitchum wore.

All Bogart, all the time!!