On A Personal Note

Twenty-five of my seventy years of life have been spent in magical, inventive, foggy, quirky San Francisco.  The last twenty I’ve lived in a one-bedroom apartment in what has become a trendy part of a city currently experiencing a population exploding with kazillionaires.

The city is fantastic, but increasingly expensive.  It is now one of those places vying for the title of “the world’s most expensive place to live.” Seriously.  Just as daunting is that my lovely, little apartment is up two flights of stairs, a climb one must make after climbing one of those famous San Francisco hills. Because of the condition my condition is in, stairs and hills lack the charm they had for my 30-year-old self.

What I’m doing here with all this personal blather is setting up an excuse for the erratic posting I expect to make on this site for the next month or two.  I’m packing books, thumb drives, furniture, pills, art and some furniture for a move to flatter and considerably warmer ground. I will be especially discom-bobulated until some order is restored. That will happen when the move is completed, my digital connections are hooked up, and my brain, such as it is, has regained the capacity to create. Meanwhile, the process of sorting through the treasures and debris of my life — as those who have already done so know – is sentimentally painful, emotionally exhausting and physically draining. Enough whining.

The bright side is that there is still another chapter in the unknown just a few weeks away.  All I really know is that it will feature sun, palm trees and mountains, not to mention miles and miles of level ground on the desert valley floor
Posted by Ronald Tierney at 1:19 PM 5 comments:

Whether he intended to or not Fuminori Nakamura’s noirish The Gun might give us some insight about those who develop an obsessive fascination with guns.  In what could be called “Ode To A Revolver,” a young man comes across a dead body. This is shocking enough in Tokyo. Worse, the dead man has been murdered. That is obvious.  But what transfixes the young man’s gaze is not the corpse, but the revolver beside the body. 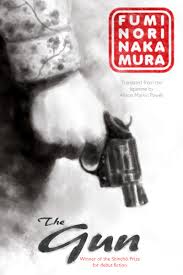 I really can’t think of anything more timely as we contemplate all the shootings throughout the U.S., the obscene number (we’re a world leader) of gun deaths by criminals, by police and by accident. This cannot help but reflect a national sickness that has become a passionate, polarizing, political controversy.  What is it with guns and Americans?

Nakamura describes the young man’s fascination with a handgun as it turns into infatuation and then turn into obsession. If the process is not overtly sexual, it is certainly sensual.

My hands trembled slightly with nervousness and I felt my body trembling with a cold sweat.  As I pushed it with the ball of my thumb, the cylinder made a little clink and moved far out to the left, stopping at a point where I could see clearly inside.  There were four golden bullets loaded in it. Each of the gold bullets was embedded in the six regularly spaced holes. For a moment I gave myself over to a sense of bewildering joy that was mingled with excitement and relief.  This is as it should be, I thought.  The gun would never betray me, it would satisfy me in every way….”

The writer paints the story in short strokes, capturing nuance in simple, short sentences, somehow squeezing out the personal in cold prose. His story is small in the sense that it is only one person’s strange world we see; yet universal in the way it characterizes how we might be led into it.

I’ve written about Nakamura before.  He was a finalist for The Los Angeles Times Book Prize. He won the David L. Goodis Award for Noir Fiction.  The Gun, translated by Allison Markin Powell, and his other crime novels received many Japanese literary awards before they began appearing in the U.S. More to come, no doubt.

Could this emotionally undeveloped psyche be what drives Americans to have this dangerous sex toy become a substitute for masculinity.


Posted by Ronald Tierney at 8:24 AM No comments: