This is the third (and final for now) post in the gangster movie pairings. These are films primarily of the ‘80s and ‘90s, though Hollywood’s preoccupation with the mob goes way back with major stars like James Cagney and Edward G. Robinson taking the roles big-time gangsters

Scarface — One of the most violent of the sub genre, Scarface was directed by Brian De Palma based on a screenplay by Oliver Stone.  Al Pacino, who also starred in the first two Godfather films, plays Tony Montana (Scarface), a Cuban refugee who becomes a major player in the drug trade. In fact, when we left the Godfather Part Two, the Pacino character was in Miami and almost moved his mob into Cuba, which is where, though unrelated, Scarface resumed.  Instead of playing a quiet, pensive Italian as he did in The Godfather Pacino plays an explosive Cuban criminal. Scarface was among the throngs of boat people Fidel Castro wanted to dispose of, sending them instead to the U.S. to undermine this country’s stability in what was called the “Mariel crisis.”

Steven Bauer is solid and charming as Montana’s best friend and partner in crime. Michelle Pfeiffer is the forbidden woman Scarface wants for his own. We get both chunk of history during the Jimmy Carter years, and a glimpse of Miami, especially South Beach before it was reclaimed as a hot spot.

Perhaps without the depth of The Godfather, Scarface, released in 1983, does ask the question, “how much is enough?” as it relates to wealth and power. It’s important to warn again: This is a violent film. So we might ask the same question about the graphic cinematography. How much is enough?

The Cotton Club — Raves from me. Apparently, the screenplay had dozens of rewrites with Francis Ford Coppola, William Kennedy and Mario Puzo, contributing. The result is a remarkably entertaining film. We’ve got a love triangle. We have a lovely vixen, a legendary gangster, Dutch Shultz and a handsome musician/actor playing dangerously at the edges of mob business. And most of the film takes place in a Harlem nightclub in the ‘30s, with top-notch music and dance. It is also a fine drama with excellent cinematography by Steven Goldblatt.

The film was based on James Haskins’ book and was released in 1984, a critical and box office success.

How to imbibe during this gangster double feature: Scarface develops a lust for Scotch before burying his face in cocaine. All sorts of cocktails as well as bottles of champagne would be appropriate for a party at The Cotton Club. For the many who avoid alcohol or who have to drive home, there are alcohol free bubblies available everywhere.

Posted by Ronald Tierney at 1:29 PM No comments:

Film Pairing — A Continuation of The American Mob

Moviegoers in the ‘last decades of the previous century found gangsters entertaining. And number of notable directors stepped up to the challenge — Francis Ford Coppola, Martin Scorsese, and Brian De Palma to name a few. Here are two more.


The Godfather, Part Two — It would seem damned near impossible for a sequel to The Godfather to stand up to the original.  And that remains true in my mind.  But the 1974 Part Two couldn’t have come any closer.  It is a fine, if not a great film. Al Pacino as Michael Corleone is every bit the equal of Marlon Brando as the original godfather. Michael is, in essence, the respectable, sensible, non-violent son, who reluctantly accepted the role of godfather when the dad dies. We watch as the poison (an all too familiar mix of unquestionable loyalty and violent revenge for those who violate it) permeates his life. There is also a bit of documentary about this film.  We witness New York City as it evolves over the decades and “the family” as it falls apart; and we gain insight into the mob’s move to Miami and the near disaster the Corleones experience in jumpin’ Havana as Cuba is about to be taken over by Castro and his rebels. Francis Ford Coppola directed both the original and Part Two, which, like its predecessor, was based on Mario Puzo’s best-selling novel. As in Part One, the cast boasts some of the country’s best actors – Robert De Niro, Diane Keaton, Lee Strasberg, Harry Dean Stanton, James Caan and, I have to mention, Troy Donahue, who is equal to his role.

Goodfellas — I had forgotten how brutal this film is.  Apparently my memory chose to retain the film’s outlandish dark humor instead.  Here we have the mafia of a later vintage than The Godfather and made perhaps a bit lighter, faster and livelier by the constant action and nostalgic period background music. Special kudos go to the casting director. First prize goes to the currently unknown Christopher Serrone, who played the main character, gangster Henry Hill, as a young man. The scene-stealer in chief was Joe Pesci (“Do I amuse you?”) who was hilariously nasty. Every actor hit his or her mark.  A warning though: Unlike The Godfather films this is a film completely about the guys. White guys. Jews, African Americans and women do not fare well in the world of thugs (hopefully not a preview of coming attractions in real life.)  Ray Liotta played the adult Henry Hill who was part of the big Air France heist in 1967. Paul Sorvino and Robert De Niro round out the cast. Samuel L. Jackson makes a brief appearance. And then there was a momentary appearance by Henny Youngman (Take my wife…please.”) Martin Scorsese directed the critically and publicly acclaimed 1990 film based on Nichols Pileggi’s, novel, Wiseguy.

What I’ve noticed during this series of films about the mafia is that there is a strong and currently reinvigorated theme that ran through the mafia sub genre of crime films and books — Family. First is blood relation. Second are those invited into the family (made men). These are guys who have proven over time and events their undying, unquestioning loyalty. They do whatever they are told. It is a closed society, and its members are untouchable. (Pardon me if I note this is reminiscent of our new first “family.”)

While viewing the double feature, an accompaniment — these films have red wine written all over them. What a great excuse to do a flight of various deep red, dry wines. Or several flights.  Pardon me purists, but for those who go alcohol-free, there are a number of such wines (getting better all the time) now in the marketplace.

Posted by Ronald Tierney at 6:40 PM No comments:

Why not spend an evening – a long one at that – with two movies on just about everyone’s Top Ten List? Certainly they occupy that status among crime movies. Both films were released in the 1970s. Both were critically acclaimed and represent  two of the world’s most famous directors’ work at the top of their games. 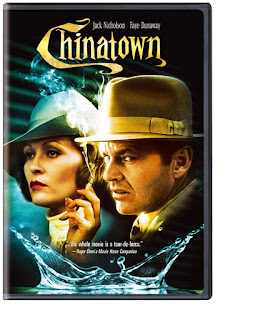 Chinatown — Put this classic in the categories of P.I. films and film noir. A fresh-faced Jack Nicholson plays an L.A. private investigator who finds himself in in the midst of an embarrassing family sexual abuse scandal and inadvertently drawn into a battle about water in a desert in 1937. When only recently the CEO of Nestle, whose products line most of the shelves of your local supermarket, claimed water is not a human right, Chinatown proves itself a timeless reflection of the eternal struggle of greed on behalf of the powerful few versus survival of the rest. John Huston represents the ugliness of pure greed — determined to get whatever he wants at whatever the cost. Directed by Roman Polanski and released in 1974, this film also featured Faye Dunaway, James Hong and Diane Ladd. Robert Towne wrote the screenplay. 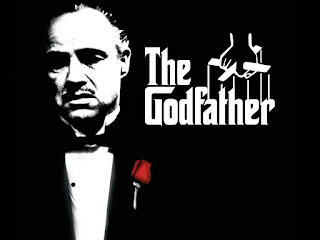 The Godfather — As I watched it for the umpteenth time I was again reminded of how much the film seemed to be a series of moving oil paintings, rather than mere moving pictures.  John A. Alonzo is credited with the astounding cinematography. He is probably the least known of the masters working together on this film.  Based on Mario Puzo’s blockbuster novel, master director Francis Ford Coppola created a film judged by the U.S. National Film Registry as one of the greatest American films of all time, exceeded only by Citizen Cane. Marlon Brando is the godfather. Al Pacino is the favored son. Both are riveting. The entire cast is stellar: James Caan, Sterling Hayden, Robert Duvall, Diane Keaton, Richard Conte, and Abe Vigoda.  Keep your eye out for other surprises, Al Martino and Morgana King, for example. The film’s story — about a major crime family unfolds over a ten-year period starting in 1945.

While Chinatown is a perfect mystery that delivers a socially conscious and powerful punch, The Godfather is delivered on a larger and richer canvas. Settle in for a classic double feature.

To accompany the long evening   (Chinatown runs more than two hours while The Godfather is nearly three), I’d suggest having a Tom Collins with Chinatown in honor of Faye Dunaway’s character.  Sip the cocktail slowly and then open a bottle of Nero D’Avola, a dry Sicilian wine, for The Godfather. Non-imbibers could do the Virgin Tom Collins, that is make the cocktail, but forget the gin.

Posted by Ronald Tierney at 10:29 AM No comments:

On Writing — Fiction As History

Occasionally I receive comments from people who have read some of the early books in my Shanahan mystery series.   These notes usually come from people who live or have lived in Indianapolis. Rarely are the comments about the plot, though critics at the time were complimentary. Some are about the main characters – Deets Shanahan and his love, Maureen.  But most of the sentiment is about bringing back memories. The 11 novels in the series set in Indianapolis cover 25 years in the life of the Circle City beginning with The Stone Veil in 1980. History is an unforeseen, but happy consequence of fiction.

I haven’t been the only one.  In fact I wasn’t the first one or necessarily the most prolific.  The acclaimed Michael Z. Lewin not only originated the first series featuring a fictional Indianapolis P.I., but is also credited with popularizing the idea of a regional P.I. series. Many others followed.  My Deets Shanahan character also came after Lewin’s Albert Samson.

Lewin and I are roughly the same vintage. However he began writing younger in his life.  Counting his Leroy Powder cop series, Lewin has used Indianapolis as a setting for 11 crime novels with a history going back to 1971 with his first Samson novel, Ask The Right Question, among those being re-released as I write.

I have inadvertently been part of recording this city’s history when, as its first editor, I helped found NUVO Newsweekly, the longest serving alternative newspaper in the city’s history. Long after I was gone it continues to chronicle my hometown and is a powerful, on-going historical reference. However, I would suggest that fiction could go beyond the news as a historical document in many ways by creating the mood, the ambiance and an in-depth characterization of its neighborhoods, restaurants, transportation and particularly its inhabitants.

There are those, of course, who dismiss genre fiction, including the P.I. novel as something less than respectable. The Shanahan mysteries are definitely genre fiction, as are the Samson novels. We gain a sense of the place in time in a way that may not be academic, but in a fluid, experiential way.

Posted by Ronald Tierney at 11:06 AM No comments: