Opinion — The Brits and Crime Tales on the Telly 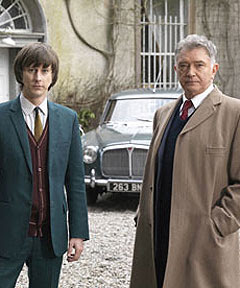 Midsomer Murders: I’m not sure why this is, but we Americans seem to enjoy British silliness while we spurn our own. But, in fact, the British can over do it as well. After the 50th episode of village festivals all over Midsomer County where someone is perforated by a stray arrow, the fun begins to dissipate. High quality and initially addicting, the Midsomer experience becomes like your old robe. You may end up confusing familiarity with comfort and the fabric starts falling apart before the 70th episode. On the other hand, if you are bedridden, these shows, initially based on books by Caroline Graham, can be a pleasantly anticipated narcotic.

A Touch of Frost: Many episodes, all of them strong well into the 15th and last season. Frost can be a maddening character. If I were working with Frost, played by the talented and comically adept David Jason, I might ask for a transfer. But, of course, having an imperfect protagonist adds believability. Is there anyone you spend a lot of time with you wouldn’t mind editing a bit? Including yourself? Neither the darkest nor lightest of murder mystery series, the gruesome is well mixed with humor. Frost is based on books by R.D. Wingfield.

Cracker: You sit there and yell at the main character, a psychiatrist fascinated with murder. “You’re such a wanker!” (I’ve always wanted to say that, but I’m from Indiana). Cracker, as a character, is frustrating, funny, overbearing and very human. In this, he shares this viewer’s mixed feelings about Frost, who is a bit full of himself in other ways. A little darker in tone and a little deeper in characterization than is realized in A Touch of Frost, this series is also worth the investment. So are the two movies that followed, one set in Hong Kong and the other in the U.S. It’s impossible to imagine anyone but Robbie Coltrane playing the part.

Wire in the Blood — There is a personal chemistry that takes place, or doesn’t, between viewer and protagonist. Sometimes it is hard to explain as it is here. In this case I never warmed to Robson Green as the main character; but there is no doubt in my mind that this adaptation of the talented Val McDermaid’s stories of another psychiatrist interested in why people kill other people is as worthy as any of the others on this list to receive the quality British Drama stamp of approval. For those who don’t mind a little extra blood and guts, this series is rewarding. Rumors of an American version have been uttered. That thought is scarier than any of McDermaid’s bloody opening scenes.

Daiziel and Pascoe: Don’t stop after the first episode. The characters, based on the books by the esteemed Reginald Hill, take some getting used to. They are more fun and more likable than they seem at first. Somehow, both rude and bland behavior can be endearing. I’m eagerly waiting for the release of more episodes.

George Gently: One of my favorites and perhaps my favorite on the list. The dark, rich, moody cinematography set in the ‘60s, shares the credit with the actors. The main character (played by Martin Shaw) is magnetic and a joy to watch. His much-to-learn partner (Lee Ingleby) is the perfect foil. If I were in charge of awards, they’d both get them. In tone, the series based on books by Alan Hunter, is a long way from the Midsomer villages. More, please.

Inspector Morse/Inspector Lewis: I came late to Colin Dexter’s creation, Inspector Morse, and I can’t quite share the overriding affection that viewers find for the show. But I suspect I hold an infinitesimally small minority view. I like Morse’s partner Inspector Lewis better, and in the spin-off, Lewis’ partner even more. The newcomer, played by Laurence Fox contributes much needed vitality to the often subdued and occasionally protracted stories.

The Last Detective: Could be for me. Who can complain about the acting? After watching American network crime dramas, almost anything from across the Atlantic seems like a blessed event. In this case, though, the main character shows just a little too much humility for my taste. It is as if he puts the “kick me” sign on his own butt before he goes out to greet the world. While the character, sarcastically named “Dangerous,” always prevails, it’s downright painful to watch him be made fool of nearly every second of an otherwise well constructed drama based on books by Leslie Thomas.

The State of Play: (This is the six-part BBC series, not the Russell Crowe film, though they are related.) Perhaps as much of a journalism story as a crime story, the series is nonetheless a short masterpiece in British story telling. And that’s the only flaw in the series. It is too short. Smart, finely crafted. Not a wasted moment. Highly recommended.

Prime Suspect: All that needs to be said has been said. If you haven’t seen it yet, you’re in for a treat.

As any devoted, crime-oriented Anglophile will no doubt point out, there are some notable series missing from this list — the Poirots, Marples and Holmes, as extreme examples. I simply haven’t seen all that many of them. (I know, I know.) But recommendations and comments are always welcome. I’ve purposely left off comment on the new, contemporary Sherlock Holmes, which blew me away the first season. More about that when we get a chance to see the second act.

Incidentally, the above photo is from the George Gently series. I included it because I really like the automobile in the background.

Posted by Ronald Tierney at 1:21 PM