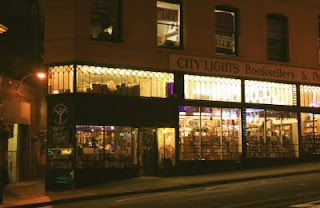 When I was in high school I discovered the Beats — Corso, Ginsberg and a whole slew of writers and poets that were unlike any I had read in literature class. In fact, these writers who were obviously treading on the established views of everything, weren’t even mentioned in the classroom. However, because of a smart, brave and progressive librarian — thank you Ms. Cohen wherever you are — I found them.

Coney Island of the Mind, by Lawrence Ferlinghetti, more than any other book, set my mind on fire. So years later, many years, when I learned that St. Martin’s Press was going to publish my first novel, The Stone Veil, I was thrilled. But for some reason I hadn’t grasped the notion that I had actually become a writer. The New York Times gave the first book a short, but generally favorable review and that too made me feel good. Borders had my books on the shelves in my hometown and I was even nominated for a prize. But the feeling of legitimacy didn’t arrive until I found a copy of my third novel, Eclipse of the Heart, in the downstairs mystery section of City Lights Bookstore in the Italian San Francisco neighborhood of North Beach.

Though I was never to be on the cutting edge of much of anything, let alone literature, I had long admired those who were. And those who were riding that sharp edge had roots in that specific bookstore. Perhaps even more important to me was the fact that City Lights published Ginsberg’s Howl and fought against attempts to ban it all the way up to the Supreme Court where the bookstore’s fight helped preserve freedom of the press for all of us.

City Lights is still publishing books others might consider too controversial or not commercial enough for mass distribution. The second floor is dedicated entirely to poetry. The main floor shelves are full of fine, timeless literature from around the world. There is also a section of limited distribution, hand-made independent magazines and collections of prose and poems. Down a narrow stairway, into the cellar, are mysteries and science fiction as well as the best picks of books on a wide range of subjects.

The North Beach bookstore is a San Francisco historic landmark, anchoring a neighborhood full of historic landmarks. It should be designated a national treasure. While most of the City Lights authors — Rexroth, Burroughs, Bukowski, Shepard and Bowles to name a few — are gone, the poet and painter Ferlinghetti, born in 1919, can still be seen bicycling on Columbus and Grant.

Posted by Ronald Tierney at 7:50 AM