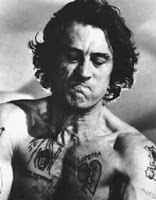 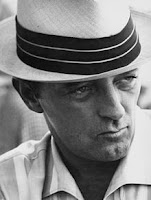 All right, it doesn’t take a genius to pair an original film with its remake. And in this case, it might have been more interesting if Nick Nolte had taken Robert Mitchum’s role in the remake of Cape Fear. We could have compared real life “bad boy” actors in bad boy film roles. However, that was not to be, so the obvious pairing of the same movie in different decades (1962 and 1991) had to be viewed in some other manner. And that manner is the gentlemanly and ungentlemanly manner of the films.

Gregory Peck, usually cast in decent guy roles, is a generally decent guy in the earlier version of Cape Fear. He plays a man who testifies in a trial that convicts a clearly indecent guy, played by Robert Mitchum. When Mitchum is released, he wants retribution. Clearly this is Mitchum’s movie and he plays the ex-con with cool, lizard-lidded, understated menace. The lines of good and evil are pretty clearly drawn and while there is some violence, the suspense comes from anxiously anticipating what we know will happen.

The first film was based on The Executioners, a novel by John D. MacDonald. The second was an adaptation of that first screenplay. Therefore, it’s not odd that the basic plot and the essence of the characters are remarkably similar. But while the first Cape Fear was high on suspense, the second is high on horror. It has been described by some as a “slasher film.” That may be an exaggeration. However the second film, directed by Martin Scorsese, is far more violent. The Scorsese version also blurs that line between good and evil. Nick Nolte, who assumes the Gregory Peck role, is not a genuinely decent guy. As the ex-con’s defense lawyer, he didn’t do everything he could to defend his client and in fact may have violated the law by excluding evidence that would have helped his client. This gives Robert DeNiro, in Mitchum’s role, greater motivation, though not justification, for his acts of vengeance.

One of the great things about Cape Fear (II) is that Gregory Peck, Robert Mitchum and Martin Balsam all do cameos in the remake. Both DeNiro and supporting star Juliet Lewis (who was exceptional) were each nominated for Golden Globes and Academy Awards. Perhaps the most interesting part of this double feature is watching Mitchum and DeNiro interpret the same role. Of the two, Mitchum, no lesser talent, is definitely the minimalist.

I’d suggest doing the films in order, not just because of chronology, but also because number two steps up the intensity significantly. For drinks, I’d suggest shots of anything as each film begins to reach its climax.

Posted by Ronald Tierney at 8:15 AM