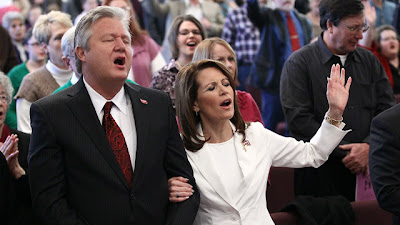 Based on one of Agatha Christie’s classics, someone invites ten prominent Republicans running for president to a big Texas ranch house. And they die off — one by one. Who killed them and why? You’ll be able to follow the story in the next few months. Here are the characters. Perhaps you know who could best play these parts.

1. A rich (trust fund baby), good-looking Mormon with a tan and a great haircut who constantly changes his mind. To show his great empathy, suggested dialogue: “Corporations are people too,” or “Forget what I said when I was running for office in a liberal state. I have.” Also, “tax returns, tax returns, what tax returns?”

2. ELIMINATED January 16 — A rich (trust fund baby), good-looking Mormon with a great haircut who doesn’t change his mind all that often. Suggested dialogue: “I believe in evolution and in science. Call me crazy.” Music inserted here that indicates he is doomed. He awaits his surge.

3. ELIMINATED January 4, 2012 — A crazy, God fearing housewife who has five answers in her head and chooses one of the five no matter what she’s asked. Suggested dialogue: “I’m at the tip of the spear,” repeated every three minutes. Or, “To me, being submissive to my husband is the same as being respectful.” Also, “God wants me to be the first submissive president.” God changed his/her mind and smote her (or is that smited her?).

4. A chubby, rich adulterous intellectual, who has been married several times and now lives with his party-going trophy wife, and who professes a strong belief in family values. Suggested dialogue: “Breakfast at Tiffanies? Hell, lunch and dinner too.” He could also say: “Let them eat cake,” or maybe “Give me the cake. Now!” Generally regarded as smart by people who aren’t.

5. A slightly addled uncle, who says crazy but strangely consistent things about how to run a country: Suggested dialogue: “Whatever regulations you want to pass, don’t. Whatever regulations are on the books, abolish. Now we got ourselves a country. Wheeeeee!” Other guests complain: He just won’t go away!

6. ELIMINATED January 19. A southern, county sheriff type (central casting) who believes if you think a guy might be guilty of a crime, you ought to be able to kill him and that old people are generally greedy bastards out to steal the tax subsidies from big oil. Suggested dialogue: “I sleep well at night,” or “What we need is barbed wire, drones and electric fences to keep the Mexicans out. I ain’t a molly coddler.” God Ronald Reagan wants me to be president. He has a lot to say if only he could remember it. Probably the next politicide.

7. ELIMINATED December 3, 2011 A tall, rich black guy whose favorite poet is Donna Summer. Background in Pizza, Whoppers and cookie dough. But surprisingly shows his willingness to go against the rich if need be. Suggested dialogue: “Even rich gay people are evil.” God ordered him to be president. God also ordered a large Pepperoni.

8. A tall, goofy Catholic choirboy, terrified of gay people, who thinks everybody should be a tall, goofy Catholic. Suggested dialogue: “Stay away from me Sheriff, I prefer to shower alone.” Also, “God wants me to be president because I can’t get elected to congress from my own state. And I need a job bad.” Also “Hello! I’m over here! Hello?” He did find a way to get attention: “Bomb Iran, ban birth control AND make oral sex illegal.” Now people know who he is.

9. ELIMINATED October 5, 2011. Another (recently rich) housewife; but this one isn’t submissive, just a crazeee diva. An addicted bromide user, this maverick is as attractive as she is simple-minded, except when it comes to publicity. At some point in the movie she is asked what newspapers and magazines she reads. Offended, she claims this is a “gotcha” question and goes medieval on the media for asking it. Suggested dialogue: “Maybe I’ll be there. Maybe I won’t,” she says while batting her eyes. “But remember, I’m the only one who can ask me questions.”

10. A shadow appears at the last minute, after all of the others are dead. There is evil laughter. “As my brother always said, “Stragedy. Damn fine Stragedy.”

Posted by Ronald Tierney at 8:55 AM