Film Pairings — One Man’s Poison And A Plague On your City, All In One Night


So many films, watched years after they’re first released, don’t hold up.  On the positive side, some, not so happily welcomed at the time, look pretty good today.  D.O.A. and Panic in the Streets seem to have bested the test of time and of some its original reviews.

Few plots could be more compelling than this one that unfolds in just 83 minutes of D.O.A.  A man discovers he’s been murdered. He just isn’t dead yet. He only has 48 hours to discover who poisoned him and why. Fundamentally a fine supporting actor, Edmond O’Brien takes over the screen. It is the signature role of his career. D.O.A., in shadowy black and white, is fast-paced and tense. There are glimpses of 1950 San Francisco and Los Angeles and a Studebaker Commander convertible (Okay, that was a personal thrill). D.O.A. is a must-see for noir fans, especially for Ernest Laszlo’s brilliant camerawork. 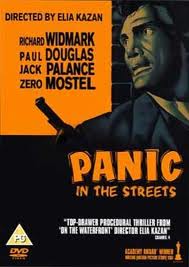 Panic in the Streets is less single-minded. But similarly, a public health officer must find carriers of the plague and do so despite bureaucratic and criminal attempts to stop him.  Like O’Brien, The official, Richard Widmark, has a 48-hour deadline. Widmark does a great job, and he is surrounded by an extraordinary cast probably more accustomed to a Broadway stage. Director Elia Kazan brought in Barbara Bel Geddes. Paul Douglas, Jack Palance and Zero Mostel.  Panic in The Streets, also released in 1950, was filmed in New Orleans and used many of the locals in smaller roles to add authenticity — and they did.  Also, the stunning cinematography of Joseph MacDonald created a gritty realism

Whatever you drink for this wonderfully moody double feature should be consumed straight. However, make sure it hasn’t been spiked with a luminous toxin or prepared by someone with a body temperature above 104.

Posted by Ronald Tierney at 9:37 AM