Observations — 1947, Some Fine Books and Plays, And Last Stand Of The Big Band

The Dead Sea Scrolls were discovered.  India and Pakistan gained independence from Great Britain.  The Hollywood “Blacklist” was created by The House of Un-American Activities Committee.   Prussia ceased to exist.  Arabs and Jews rejected proposal to split Palestine.  Carbon dating was first used. Microwaves were discovered. The transistor was invented.  Chuck Yeager broke the sound barrier. Thor Heyerdahl crossed the Pacific in the Kon Tiki.  Jackie Robinson joined the Brooklyn Dodgers. “Meet The Press” debuted on NBC.  John D. Rockefeller donated the land for the U.N. building. John Paul Sartre wrote Existentialism. Charles Ives was awarded the Pulitzer Prize for Music for Symphony No. 3.   Arthur Miller’s All My Sons and Tennessee Williams’ A Streetcar Named Desire premiered on Broadway. André Gide received the Nobel Prize for Literature.  Robert Penn Warren won the Pulitzer Prize for Literature for All The King’s Men. In 1947 we also read Saul Bellow’s The Victim, Malcolm Lowry’s Under The Volcano and Dr. Faustus by Thomas Mann.  We watched Out of the Past, Odd Man Out, Crossfire, Black Narcissus, Miracle on 34th Street, Gentleman’s Agreement, Brighton Rock, Nightmare Alley, The Fugitive and Body and Soul.  We listened to “The Old Lamplighter” by Sammy Kaye, “I Love You For Sentimental Reasons” by the Nat King Cole Trio, “Open The Door, Richard” by Count Basie, “Managua, Nicaragua” by Freddy Martin, and “Heartache” by Ted Weems.  Among those who died this year were Al Capone, Aleister Crowley, Bugsy Siegel, Henry Ford, Max Planck, Willa Cather and Man O’ War.  Taking their first gasps were:  Iggy Pop, Arnold Schwarzenegger, Elton John, Mitt Romney, David Bowie, Stephen King, Hillary Clinton, Carlos Santana, David Letterman, James Patterson, Kareem Abdul-Jabbar, and Nolan Ryan.  If you were around during this year of the pig, what were you doing? 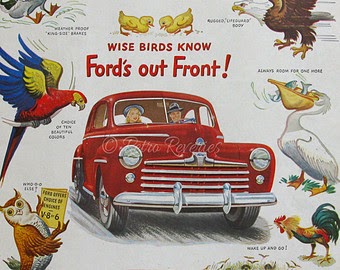 Posted by Ronald Tierney at 8:49 AM

Email ThisBlogThis!Share to TwitterShare to FacebookShare to Pinterest
Labels: 1947, Observations

This is the year I entered first grade, so naturally my concerns were smaller than the things in the wide world. It was a good year, though, and I kept on answering the school bell every year until my retirement from teaching in 2002.