Film Pairings — The Laundry Business, From Colombia To Russia


Money from ill-gotten gains is no good unless you can spend it. So tonight is an examination of the money-laundering business. One of the two films is based on a true story about the days of Pablo Escobar in the 1980s. The other is a current classic British spy film soaked in Russian intrigue. These two films, released earlier this year, are not action oriented — though there is some of that. Even so they qualify as thrillers. 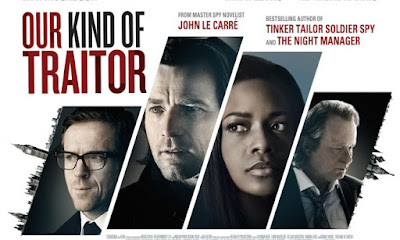 Our Kind of Traitor —If you like John le Carré, chances are you’ll like this understated film based on his novel starring a mature and impressive Ewan McGregor as well as scene-stealer Stellan Skarsgãrd.  The cinematography stars as well, with powerful imagery by Anthony Dod Mantle.  McGregor portrays an innocent professor who, believing he was merely doing a minor good deed, accidentally involves himself and his wife played by Naomie Harris in international intrigue, billions of dollars and the Russian mafia.  Directed by Susanna White, the film also features Damian Lewis, Alicia von Rittberg and Velibor Topic. This isn’t a naturally panoramic story, but it is played out in a big way, cinematically. It is also very much a story about the value of character.

The Infiltrator — Perhaps a bit less cinematic in scope, but with more grit. Bryan Cranston plays an aging (his last case?) special agent for the U.S. Custom Service. Based on agent Robert Mazur’s true-life novel, we visit Florida and the 1980s when there wasn’t enough room to store all of the drug war’s corpses until they could be disposed of.  Cranston, incredibly believable as Mazur, reveals the ugliness of the “good guys” as they attempt to contain evil while the plan to go against Escobar and his brutal Colombian cartel escalates in an increasingly deadly fashion. Among the film’s strengths are Cranston’s costars: John Leguizamo, Benjamin Bratt, Diane Kruger, Amy Ryan and Said Tghmaoui. Directed by Brad Furman, the film certainly has some tense and gruesome moments.

Well of course, what we sip during these two movies changes during intermission. No drinker would argue against vodka with the first. We have a chilly environment. Frilly drinks won’t work. However we make a drastic change when we arrive in Florida. Though there is nothing Cuban about the film,  we can cheat and try some of that new Cuban rum arriving on our shores.