Film Pairing — Orson Welles And The World Of Noir 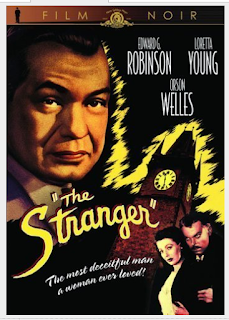 The 1940s seemed to be the best years of film noir. Humphrey Bogart, Robert Mitchum, Robert Ryan, Sterling Hayden, and Richard Widmark were the regular tough guys of the genre. Another actor stands out, not only for being the center of attention on screen, but one of the major forces off screen.  Not always my personal favorite, Orson Welles, has nonetheless created four of the best in the genre just short of single-handedly.  Here are two of them.

The Stranger — In black & white, in high contrast and with a huge cast of shadows, Welles teams with an innocent beauty, Loretta Young in small-town post WWII America. Released in 1946 to an America recovering from the war and the horrors of Nazism, we are introduced to a fleeing war criminal (Welles), his pursuer, Edward G. Robinson and the criminal’s love interest  (Young). The film, directed by Welles, is melodramatic, stilted and yet suspenseful. Notes from various critics suggest Welles had wanted a more Nazi-oriented slant to the film rather than a small town murder story. It nonetheless works in its released form. In addition to the excellent cinematography by Russell Metty, I was also pleased to see a very young and talented Richard Long, who played Loretta Young’s younger brother. 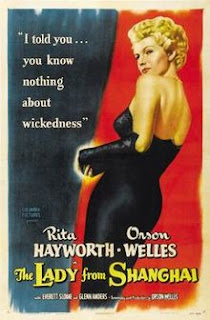 The Lady From Shanghai — If The Stranger was muted by too much convention, The Lady From Shanghai might have suffered at the time of its release in 1947 by being too unconventional. We have Rita Hayworth, at her most devastatingly beautiful, playing the girlfriend of an extremely wealthy, older man, Everett Sloane, who doesn’t mind sharing her with the Irish tough guy, Orson Welles. Aside from the constant “sophisticated’ chatter, there is true noir here in my opinion, with twist on twist, dark and ingenious cinematography, and the lovely backdrops of Acapulco, Sausalito and San Francisco. Not Shanghai, however. The last scene was extraordinarily innovative, well worth the price of admission alone. The film was directed by Welles, based on the novel, If I Die Before I Wake by Sherwood King.

What would you drink on an autumn evening in New England? Maybe a sherry or port? That would do while you watch The Stranger. However traipsing about aboard a yacht in Acapulco might suggest some sort of icy tequila drink to accompany the second half of the double feature.

Posted by Ronald Tierney at 8:42 AM