On Publishing — Book Covers And A Sly Self Promotion

Much like parents and their children, writers aren’t supposed to have favorites among the books they’ve written.  I do have favorites, but I will, keep those to myself for the time being.  Instead I will focus on the cover design of my books.

For the most part, mid-list mystery writers (and I flatter myself) have very little choice in the covers  I’ve always found that frustrating.  I’ve spent most of my life as an editor of publications where I had much more control over the visuals that accompanied the words. 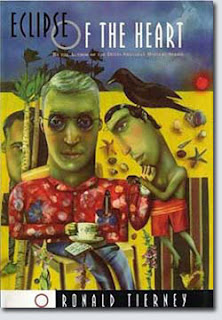 The world of book publishing is different.  Of the eleven Shanahan novels, the mystery series for which I am best known, I hadn’t even a warning of what the covers would look like before they were selected. The manuscript went into the system and eventually out popped a book with my name on it.  However, the legendary editor Ruth Cavin at St. Martin’s accepted my request to look at artist Janet Woolley for my out-of series book, Eclipse of the Heart.  Woolley and jacket designer Michael Accordino created my favorite cover of any of my books. It’s quite clear that Woolley read the manuscript before doing the illustration.  The whole book is in the illustration, enhanced by the elegant typeface chosen by Accordino. I regret only that I had not contacted her to tell her how much I appreciated her work. I was pretty new to the process. Unfortunately, the book is out of print.

From a marketing perspective I suspect all book covers should entice the potential reader to pick it up and look at it, or click the icon, the first steps in the purchasing process.  However, as all fervent readers have discovered on their own, the cover can be grossly misleading.  As an author I want the cover to honestly reflect what’s inside — all of it, including the tone and the quality of the story and the prose that tells the story. It’s a kind of “truth in labeling proposition. Eclipse of the Heart did it for me. It was perfection. If you don’t like the cover, you probably won’t like the novel.

Looking at the cover that way, the book didn't fare so well in the German translation, at least as it applies to cover art.  Die Tequila-Falle, (the Tequila Case) as the title was translated, was interpreted by the publisher as a sexy gay romp. I’d call that somewhat dishonest.  Readers wanting a sexy gay romp won’t find the romp.  And readers wanting a more significant story are likely to skip it altogether. By changing the title and more importantly, the cover art, the German publishers also trivialized Mexico, a rich setting integral to the story. Tequila, I might add, had nothing to do with anything except perhaps the publisher’s thirst.  Fortunately the Italians redeemed my appreciation of translations with this totally appropriate cover of the Shanahan mystery, The Concrete Pillow.  It also brought me my first million (lire, that is — about $600 at the time). Bless them for not calling the book The Spaghetti Caper.

When Severn House, publisher of the last seven Shanahan books, picked up my new series featuring unlikely P.I. partners Noah Lang and Carly Paladino, they allowed me to suggest a cover photograph that inspired the first book, Death In Pacific Heights. They worked it out with photographer, Adam Moore.  With the second series book, Death In North Beach, I submitted a night photograph I had taken that illustrated that historic neighborhood . Both covers met the criteria of matching the stories told between the covers. Now, whether it met the marketing criteria is something else.  Neither zoomed to the top of The New York Times Bestseller list.  Even so, the author is happy.

I was also involved in the reissue of the first four Shanahan novels in e-book and paperback formats, working directly with San Francisco-based as well as talented and experienced Visual Strategies. For me, participating in the bookmaking process adds considerably to the joy of writing. The result, in this case, was a strong and clearly inter-related series of books.

I have a new book, a novella, coming out in March. I look forward to The Black Tortoise, the cover of which will mirror its predecessor, The Blue Dragon. I’m hoping for a third. Even in this late date in my career, there is a temptation to take a new book from manuscript to published novel, with a near complete hands-on approach. I say “near” because only a fool would proceed without some sort of skilled copyediting and design help.

Posted by Ronald Tierney at 8:29 AM