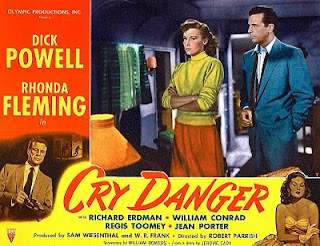 The two main attractions to noir, for me, are the stark, shadowy cinematography and the crisp, tough dialogue that often accompany them. Cry Danger has the banter — some of the best of the genre. The Big Combo has the photography. Maybe only Night of the Hunter catches the dark world of crime on celluloid as well.

While I was growing up I remember watching Four Star Theater. The idea was that four major stars would take turns making high-quality dramas for TV, still in its infancy. There was some confusion in the launch, but in the end the four big-screen Hollywood stars that would grace little ole network TV were Dick Powell, David Niven, Charles Boyer and Ida Lupino. For some reason I never looked forward to the Powell installment. He always struck me as an announcer-type, the emcee introducing Jack Benny. A leading man? I didn’t understand it.
What I hadn’t seen was Powell in his heyday. After Cry Danger, it’s clear I must go back and see Powell in all this early movies. He was the perfect wise-ass hero, delivering one-liners as well as anyone. The film, (1951), set in Los Angeles, is about a guy released from prison who wants to find the money he was accused and convicted of stealing. Richard Erdman is a witty, cynical alcoholic conman who becomes Powell’s best and most trusted friend. The femme fatale is Rhonda Fleming. We also see a slim, or relatively slim William Conrad play one of the bad guys. The film has guns, blond bimbos, big old Nash automobiles, and trailer courts. What else could you want? 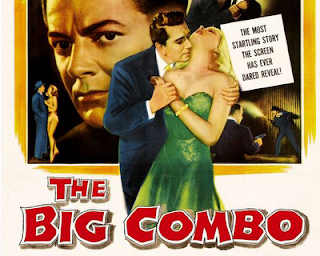 The Big Combo, a name that unfortunately makes it sound like a special from Pizza Hut, was made a few years later in 1955. It stars Cornel Wilde, Richard Conte, Jean Wallace and Brian Donlevy, who gives the best performance of the film as an aging tough guy. Conte, as a heartless gangster, does a good mean and his destruction is police lieutenant Wilde’s obsession. As good and evil battle it out, the big star of the movie is cinematographer John Alton, who makes what little illumination there is in the film glow as if it were more spirit than light. Earl Holliman and Lee Van Cleef play minor thugs who share a bedroom. There were a few other moments that must have given the overly prudish 1950s censors pause. Then again, they may have missed the subtle, scandalous innuendoes.
Though less than clear about which big city was the setting for the Big Combo, it was definitely a big city — a Chicago or New York. Cry Danger was definitely L.A. That being the case, maybe we soften the hard liquor a bit. Maybe it’s a whiskey and soda over ice kind of thing.
Posted by Ronald Tierney at 8:25 AM