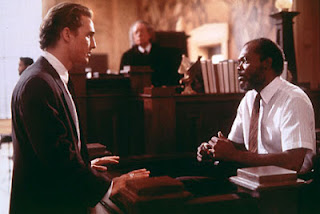 I never saw what the deal was with Matthew McConaughey. Perhaps it was because he played unintentionally unsympathetic characters in the kind of movies I wasn’t inclined to see anyway. However, twice that I know of, McConaughey gave performances so clearly on the mark, I can’t imagine another actor pulling them off as well. Both times — in roles years apart — he played an attorney. Both films were based on characters and stories created by deservedly best-selling novelists, who — surprise — liked the movies made from their books. And both times the actor, most famous for taking his shirt off in films, didn’t need to carry the films on his bare shoulders, but could rely on a highly talented supporting cast.

The first is A Time to Kill, based on John Grisham’s novel by the same name. We go back to 1996. A black man kills the two white men who raped and killed his daughter. The movie controversially sets up the conflict of letter of the law against righteous revenge. Are we a nation of laws? We’d like to think so. But what if the law won’t exact justice? Is vigilantism ever justified? The film was panned by some critics because the film appeared to take a side in the argument.

On the other hand there is no argument about the cast. It is stellar. Samuel L. Jackson played the pivotal role of father. He was nominated for a Golden Globe Award for “Best Supporting Actor.” One could make a case that it should have been for “Best Actor.” Among the others who contributed to this solid drama were: Kevin Spacey, Donald Sutherland, Kiefer Sutherland, Sandra Bullock, Ashley Judd and Chris Cooper. The background, as you might have guessed, is the Deep South. The KKK is featured. The problem is that while the white sheets rarely make appearance these days, the attitudes haven’t disappeared. The film remains timely. 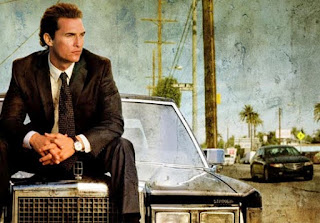 The second feature is The Lincoln Lawyer (2011). An older, somewhat weathered as well as appropriately wizened McConaughey plays Mickey Haller who plays all sides to get what he needs. One has the sense that the only people he won’t game are his daughter and his private investigator, played by William Macy. On the other hand, Haller lives and works in a world where trust is dangerous and playing it straight is unprofitable. Again McConaughey is backed up with a talented cast. In addition to the always incredible Macey, we see Marisa Tomei, John Leguizamo. Bryan Cranston does a great job of playing a tough, veteran, cynical cop. And Ryan Phillippe creates perfect pretty boy sociopath.

Haller is the lawyer whose office is in the back of Lincoln Town Car. He is the creation of best-selling crime writer Michael Connelly (see last week’s post) and this is the first of what promises to be a major series of books and if the news last updated in August holds true, will follow Grisham’s The Firm onto the small screen in a series proposed for ABC-TV.

Finding an appropriate drink to accompany the movies is made difficult by the small-town Mississippi setting for A Time To Kill and the L.A. fast lane for The Lincoln Lawyer. I’m thinking that we look at something good in hot weather. Never mind that many are still enduring March, that cruel month. How about a gin and tonic? If you’re feeling particularly Southern, put in a mint leaf.

Posted by Ronald Tierney at 8:43 AM