Blatant Promotion — Still Another Word From Our Sponsor 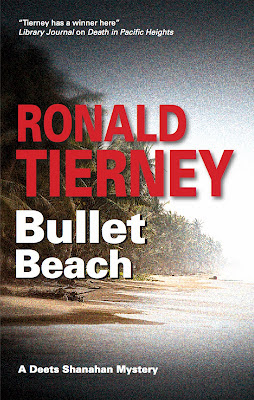 Seventy-one-year-old private investigator, Deets Shanahan, takes on the search of a lifetime. With only a snippet of news found on the Internet, he learns his brother — who disappeared when they were kids — could be alive and somewhere in Thailand. Eager to tie up the loose ends of his life, Shanahan and lover, Maureen, embark on an exciting and dangerous journey to find the errant sibling only to find out they may not be the only people who want to find him. Treasure, deceit and murder are at play on the streets of Bangkok and on the beaches of Phuket.

Halfway across the world in Indianapolis, Shanahan’s younger and frequent partner Howie Cross, has been set up to take the fall for murder. Two young and attractive dead bodies in the trunk of a car complicate what was supposed to be a routine, late-night auto repo for Cross. Who are the victims? Who killed them? Why? Unfortunately they aren’t the only bodies to be linked to the younger detective who is caught between the police and the people trying to frame him.

Here’s what the critics had to say about the tenth in this highly regarded private eye series:

Tierney ties the two disparate plots together at the last minute and adds spice to the story with eccentric characters, wry humor, and a spare but compelling writing style. Engaging and entertaining. — Booklist

Tierney is as entertaining as ever. In particular, thumbs up for the nice, understated septuagenarian love story. — Kirkus Reviews

The book is available in hardback, trade paperback and e-book. For more information about Bullet Beach and the Shanahan series, click here.

Posted by Ronald Tierney at 8:33 AM