A Little More Self Promotion: Two More For Your Listening Pleasure

Amazon’s Audible reached an agreement with my publisher, Severn House, to release my most recent books for audiophiles.  Bless both of them. You can find the complete audio list of my books here. Meanwhile, here are descriptions of the two most recently recorded. 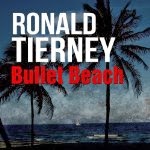 Bullet Beach — Seventy-one-year-old Indianapolis private investigator, Deets Shanahan, takes on the search of a lifetime. With only a snippet of news found on the Internet, he learns his brother — who disappeared when they were kids — could be somewhere in Thailand. Eager to tie up the loose ends of his life, Shanahan and lover, Maureen, embark on a journey to find the errant sibling. But this is more than a story of a missing person who wants to stay missing. Treasure, deceit and murder are at play on the streets of Bangkok and on the beaches of Phuket. Narrated by Ric Jerrom
“Tierney is as entertaining as ever. In particular, thumbs up for the nice, understated septuagenarian love story.” — Kirkus Reviews
“Tierney... adds spice to the story with eccentric characters, wry humor, and a spare but compelling writing style. Engaging and entertaining.” — Booklist 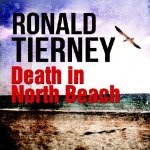 Death in North Beach — Sweet William, a handsome, charming and discreet professional companion to the wealthy, needs help. A famous, but not beloved, novelist is found dead. William is the prime suspect. His only salvation is for the real murderer to be found. He is able to provide a list of suspects — prominent figures connected to San Francisco's legendary North Beach — whose secrets may be revealed in the victim's soon-to-be published tell-all.  Private investigator Carly Paladino agrees to take William on as a client. But the question remained: Was the devilish gigolo telling the truth or did she fall under his spell?
Whatever the case, Carly and her streetwise and skeptical partner, Noah Lang, stir up serious trouble when they try to find the manuscript — and the murderer. Much like North Beach itself, the suspects are trying to preserve the image they want the world to see.  Light-hearted with an end that pays homage to mysteries of an earlier era.  Narrated by Katherine Fenton.
‘This is a witty, very engaging entry in what promises to be a thoroughly entertaining new series.” — Booklist
“The interplay between Carly and Noah is delightful – talk about opposites!” — George Easter, Deadly Pleasures
“Good, dirty fun – with a delightful icing of San Francisco details.”— The Rap Sheet


“The Carly Paladino and Noah Lang Mysteries have “the makings of a superior series. Tierney, author of the Deets Shanahan series, has a winner here.” — Library Journal