As I may have suggested a couple of posts ago, Orson Welles could be the poster boy for American film noir. Personally I would only go so far as to say he is certainly one of the prime contributors. One of his films, Citizen Kane is among those films at the top of everyone’s “best list” and some argue that it is the first American noir. There are those who claim the classic is not noir at all.

For tonight, we’ll leave the sacred Citizen Kane and the noir debate for another day, focusing instead on two other Orson Welles’ films, each with a unanimous noir stamp. 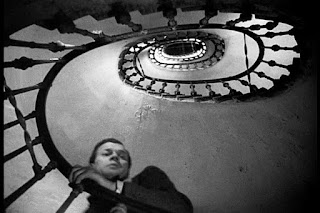 The Third Man — This film is the basis for the novella by Graham Greene in an odd turn around of process. Here, we visit moody post-war Vienna, deep in shadows and shadowy deeds.  Joseph Cotten visits in search of an old friend, Harry Lime (Orson Welles). And the mystery begins. Cotton’s friend is hard to find and the pieces left behind become increasingly suspicious to Cotton. There is evil here; but where does it reside? The authorities or Harry Lime?  The old world backdrop is the the true beauty of the film, and cinematographer Russell Metty takes full advantage of it, including the final scene as Welles, the missing Harry Lime, explains his view of the world to his old friend as they are atop a Ferris wheel observing the people below as ants not particularly worthy of any empathy in their suffering at the hands of Lime, himself.  The film was directed by Carol Reed and released in 1949.  Trevor Howard is also featured, as is Alida Valli as Lime’s love interest. 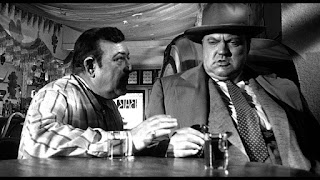 A Touch of Evil — Charlton Heston, as the force for all that is good, never really challenges the slovenly evil Orson Welles for the center of attention in this late noir (1958) film, also shot by cinematographer Russell Metty. The action takes place in seedy adjacent towns straddling the border of Mexico and the U.S. With exception of those scenes in which Welles — bloated, unshaven, sweating and slobbering — held forth as a corrupt border town sheriff, I had the feeling I was watching a film made for television. But when Welles was on, he filled the screen and, well hell, he scared me. Even the sets he chewed were more impressive during his scenes.  No doubt this is a worthwhile film for noir lovers, but there was more ‘60s than ‘40s in the atmospherics and I prefer the latter. The cast was also a curious lot.  In addition to Janet Leigh and the notable performance of Akim Tamiroff, we have brief appearances by Joseph Cotten, Marlene Dietrich, Zsa Zsa Gabor and Dennis Weaver. Orson Welles directed the film based on author Whit Masterson’s novel, Badge of Evil.

The dirty sheriff in Touch of Evil drank his bourbon straight up perhaps one too many times.  Don’t be a dirty sheriff. Think Vienna.  As I understand it, the Viennese drink lots of coffee and beer.

Posted by Ronald Tierney at 9:10 AM

Sorry, but this always drive me crazy.

Thanks Mike. I appreciate it.