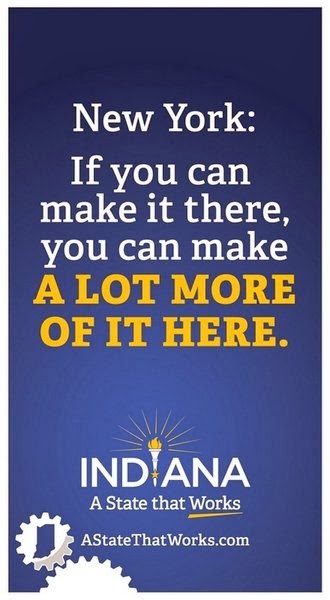 A big and no doubt expensive ad in The New York Times tries to convince NY businesses to move to Indiana without telling them Indiana is anti-gay and is a place where the marriages of many of their employees would be invalidated. The state’s legislature is in the midst of passing an amendment to the state constitution to outlaw same sex marriage as well as civil unions. Why would New Yorkers want to move there?  Is it because the Indiana Governor wants creationism taught as a science?

I’m a Hoosier to the bone; but it’s hard to stay proud when my birth state acts like Alabama and Mississippi in the ‘60s. Shame on Pence and Bosma.  It’s pretty clear that in the future the International Olympic Committee will disqualify potential sites if they discriminate against minorities.  I suspect the NFL and other such groups will soon do the same.