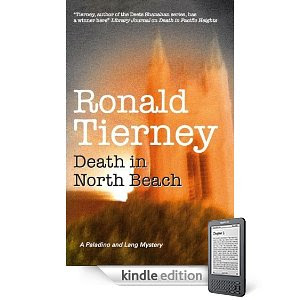 A brief word from our sponsor: London-based Severn House, who currently publishes both the Shanahan series and the Paladino/Lang San Francisco series, has just released the most recent book in each — on Kindle. Bullet Beach and Death in North Beach are both available now for download.

There will be additional announcements soon — about making the early Shanahans available in e-book formats (and as books on demand), so that those who came late to the series can see how it all began. Also in the works are first editions of stand-alone mystery novellas. Now, we return you to regular programming.

Posted by Ronald Tierney at 9:09 AM

Email ThisBlogThis!Share to TwitterShare to FacebookShare to Pinterest
Labels: Opinion