Film Pairing — Murder in the Rye 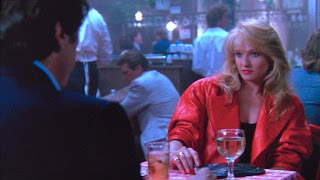 The first time I saw Ellen Barkin on screen I was disappointed. She didn’t seem to be sexy enough to play the irresistible female lead for which she was cast. But it didn’t take long to be seduced. Every moment on screen she became more beautiful. I can only suspect that this is a tribute to talent rather than an accidental gift of birth. Barkin is one of the wonderfully uncommon denominators in this double feature. She is the love interest for both Al Pacino, a cop in Sea of Love (1989) and Dennis Quaid, a cop in The Big Easy (1987). Both films also have the talented John Goodman in common. His role would come under the best supporting cop category.

The two films are given a boost by the soundtrack, appropriately chosen mood-enhancing music; but mostly they have a shared reality. I’m not sure I can explain what I mean by that, at least in succinct terms. Suffice it to say, you will not be jarred when you move from one film to the other, even though you will be moving from a predictably intense New York to a more laid-back New Orleans and from the predictably intense performance of Al Pacino to a comparatively laid-back characterization by Dennis Quaid.

If you know someone who knows the art of fine cocktail making, request the Manhattan (with Rye) for Sea of Love and switch to the Sazerac (made with Rye and a dash of absinthe) for The Big Easy. Because of the Rye, you will not be jarred when moving from one cocktail to the other. Because of the absinthe, it really won’t matter anyway. The only downside is that you will not be able to get the song, Sea of Love, performed by the Honeydrippers, out of your mind. Ever.

Posted by Ronald Tierney at 7:52 AM