Film Pairing — Patricia Highsmith and the Other Ripleys 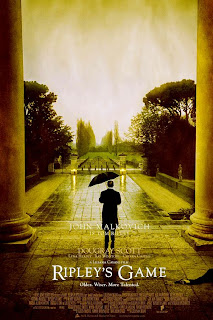 In 1977 director Wim Wenders, who had cast Dennis Hopper in the title role released an adaptation of Patricia Highsmith’s Ripley’s Game. The movie, Der Amerikanishe Freund, which translates The American Friend, has been praised for its gritty cinematography. The film is jumpy, dark and perhaps artfully unpredictable. But of all the Ripleys, Hopper’s (or Wender’s) is my least favorite. Maybe it’s just my petty objection to Mr. Ripley wearing a cowboy hat, which I suspect he was forced to wear to make him “American.” I’d also guess that this Ripley was far more Wender than Highsmith. (Why people buy the rights to a book only to rewrite the plot and change all the characters is beyond me. If you’re not putting the book on screen, write an original screenplay, folks.)

Though inexplicably not originally released in the U.S., the British, 2002 Ripley’s Game starring John Malkovich, is definitely more gripping, perhaps because it is more accessible. It is about the original author’s Ripley, not the director’s. And what a Ripley Malkovich is. He may have created the most evil, the most insidious of all of them — a joy to behold. (Others who have played Mr. Ripley are Alain Delon, Matt Damon and Barry Pepper.)

Watching these two films in the same evening might be something you do with a roomful of film buffs. In that case, leave some time for arguments about the nature of art and be sure to have several bottles of Scotch ready.

Posted by Ronald Tierney at 8:54 AM