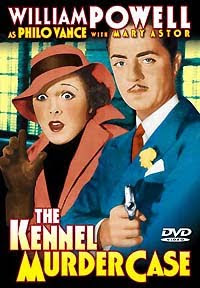 I’m a shameless fan of William Powell. The thin mustache, the somewhat silly manner, the light-hearted approach to life. The fact that Nick Charles is so far removed from Sam Spade is, as far as I am concerned, one more tribute to Dashiell Hammet who had the ability to create two polar-opposite but iconic private eyes. Film-wise, the surprise comes when you see that William Powell didn’t spring virginally from the pages of Hammett as Nick Charles. He had a practice role and it was nearly as much fun as Nick himself. In 1933, a suave William Powell played S. S. Van Dine’s popular detective, Philo Vance in The Kennel Club Murder Case — a beautifully shot film that is not only a well-crafted mystery but also a near documentary on ‘30s design and architecture. In 1934 a slightly looser, maybe more lubricated William Powell played the charming Charles in The Thin Man.

The two movies, illuminating a very narrow slice of an era, are meant to be seen together. The more serious Philo Vance should be seen first, I’d recommend, followed by the bubblier Thin Man. Save the Martinis for the second feature. If San Franciscans want to substitute the sequel, After The Thin Man, for the original, it may alienate purists, but is understandable. The cinematography captures a historic and irresistible City by the Bay.

To repeat myself, make sure you have a shaker and some Vermouth.

Posted by Ronald Tierney at 9:56 AM