Forget for a moment Harrison Ford’s work in Indiana Jones, Star Wars and the superior Blade Runner. He has anchored dozens of popular movies reflecting our times and dozens more of pure escape. I do not know him, nor do I have any knowledge or opinion about the man as a human being. Like everybody else I’ve seen an occasional interview on TV.  Ford seems uncomfortable, awkward, as most of us non-celebrities would be with a camera in our face. That may be the magic he brings to his roles, a man uncomfortable with the expectations others have of him or those he has of himself. He is much like us.  He is for his generation what Jimmy Stewart was for his — our stand in.

There are actors — James Garner, Tom Hanks, Gene Hackman among them – who have an easy believability.  Harrison Ford is also one of those. He’s not Daniel Day Lewis or Christian Bale, an actor convincing us he’s Lincoln or a serial killer; but this guy, essentially the same guy he’s been in the last several movies, effortlessly it seems, convinces us that Harrison Ford is not the character, but that the character is Harrison Ford. And he’s damned good at it. 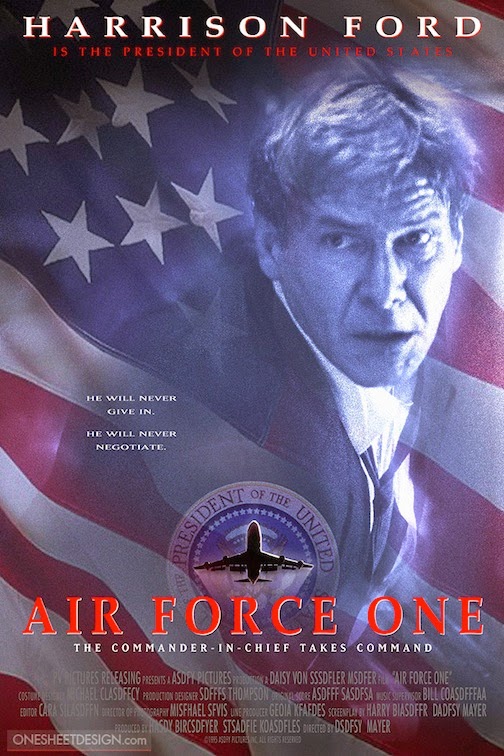 Instead of going for Indiana Jones, Hans Solo, or Jack Ryan, characters he helped make icons, there are several films that are especially well done thrillers: Frantic, Witness, and Presumed Innocent. They are well worth your time. Then there are those in which Ford adds just enough to standard fare, making what might otherwise be a mere modest evening’s entertainment an enjoyable adventure.  Here are two:

Air Force One — If one wanted to learn how to put together a thriller, he or she would do well to study Air Force One.  The bones of the movie’s structure are entirely visible. It’s about a nice guy, former war hero, his lovely wife and daughter whom he loves.  Make him the leader of the free world and put the lives of that world and his lovely family in constantly changing yet increasing jeopardy. Next, once this thing takes off (plane and story) don’t let anyone take a breath. Add lots of patriotism, including a stern President Harrison Ford telling villainous Russian Gary Oldman, in Reagan-like tones, “Get Off My Plane.” Nothing new here. However this is a solidly made film that does what it sets out to do and you will watch it on the edge of your seat while you moan at its predictability and overwrought patriotism. Directed by Wolfgang Peterson, this 1997 film also features Glenn Close, Dean Stockwell, William H. Macy and Paul Guilfoyle. 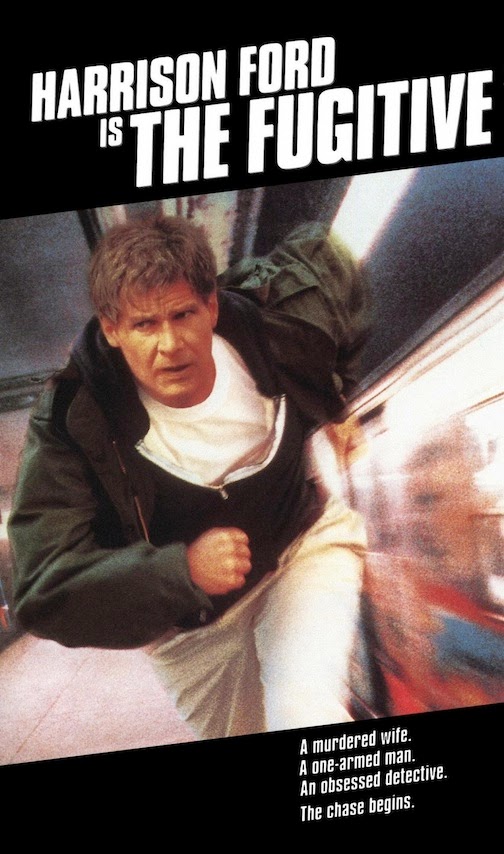 The Fugitive — This is a story thrice told. It is based, however loosely, on real life story in which a physician is accused of killing his wife. The reporting of of the crime and trials were sensationalized and formed the basis for the wildly popular TV series starring David Janssen and making the “one-armed man” a regularly used phrase to create doubt in an excuse or alibi. In film as in the TV series, to prove his innocence he must be free to find the actual murderer. But the main pursuer is no idiot and he has resources the lonely runner does not. It is cat and mouse all the way. Who knows why anyone would try to top the TV show? But producer Roy Huggins and his crew did so in a remarkably successful way.  The 1993 movie, with Harrison as fugitive Dr. Kimble accused of the crime, goes on the run and the rest is cinematic history. This was a huge box office triumph and whatever negative criticism surfaced was buried in the film’s success. In the end The Fugitive not only made tons of money, but was also nominated for seven Academy Awards, with Tommy Lee Jones winning Best Supporting Actor for his role as the chaser in this thrilling chase movie. Andrew Davis directed.

If you’re having a mixed drink, nothing too sweet.  Think about Scotch and water, soda or on the rocks.  These are old-fashioned thrillers.  They will keep you wide awake without taxing the gray matter.  If you’re going alcohol free, I’ve found tonic with a bit of lemon to have the right touch.  It’s not wrong to have popcorn and Coke with these two.

Posted by Ronald Tierney at 7:40 AM