Film Pairing — Three of a Kind: Blow Up, The Conversation, Blow Out 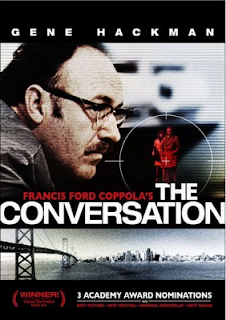 Blow Up (1966) — Michelangelo Antonioni directs David Hemmings, Vanessa Redgrave, Sarah Miles in what becomes a preview of the modish, faux glamorous seventies that would follow. A famous celebrity and fashion photographer discovers he has accidentally captured a murder on film. It is barely visible at first, so he begins to blow up sections of the image. It takes awhile to put the pieces together and the process (interrupted by some silly cavorting with giggling models) sets up oddly captivating unraveling of the mystery. Nominated for several international awards, including two Academy awards and the Cannes Grand Prix, Blow Up was the inspiration of at least two other films, one great, and one certainly good enough.

The Conversation (1974) — Francis Ford Coppola directs Gene Hackman, Robert Duvall and Harrison Ford in a movie no doubt inspired by Antonioni’s classic. The key element here doesn’t come from a small, almost hidden element in a photograph taken in a London park, but from untangling sound snippets on tape. Each fresh revelation of this conversation between two people in San Francisco’s Union Square leads to an eventual truth. Though the technology used in the film is now more than 30 years old, the current, extraordinary ability to invade privacy for good or evil and the unexpected consequences of doing so, is foreshadowed here. The story is intricate. The sensibility is realistic. The tension is palpable. Hackman is one of those actors who can make a mediocre movie good. Here, his talent and the movie itself are finely matched. The Conversation was nominated for three Academy Awards and received the Palm d’Or at the Cannes Film Festival.

If you have the time and inclination, consider a third movie for the evening. Not quite as history making as the first two and possibly more derivative than inspired, it is nonetheless a tightly woven and worthwhile thriller.

Blow Out (1981) — Brian DePalma directs John Travolta, Dennis Frantz and John Lithgow in a film that has elements of both its predecessors. Travolta plays a sound technician for a sleazy sex and horror moviemaker. In the course of trying to record ambient sounds out beyond the Philadelphia suburbs, he accidentally picks up a sound that suggests that the presumed accidental death of a presidential contender is, in reality, an assassination. The powerful are at play and Travolta possesses dangerous knowledge. No award nominations here. In fact, Blow Out was pretty much a loser at the box office. But don’t let that put you off. While DePalma seems to have made a career of aping others, often in a more violently and sexually exploitive style (Hitchcock’s Psycho versus DePalma’s Dressed to Kill, for example), this one works. Travolta’s performance exceeds expectations. DePalma’s real-life wife, Nancy Allen — also in Dressed to Kill — does a fine job in this film.

The evening libations? Perhaps a little champagne with Blow Up. While it is a great film, there is something a little too bubbly about the times. The Conversation is serious and, so something on the rocks here. You choose. With Blow Out, go back to the champagne. Now that a few bubbles have expired, it may be a match.

Posted by Ronald Tierney at 8:35 AM

Three of my favorite movies. Great booze selection to go with them!

Thanks for the comments. I certainly miss seeing Gene Hackman in new films.