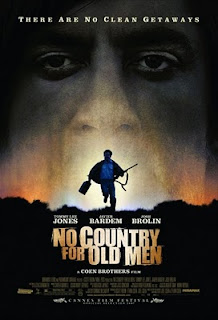 These two films are on my personal “top ten” crime movie list. But they couldn’t be more different. The only thing they have in common is that they incredibly well made — fantastically well written, finely acted and brilliantly directed. Too many fabulous adverbs here. I apologize. Let’s just say that the ultimate noir meets the ultimate cozy. Why not make them a double feature some Friday or Saturday night?

No Country for Old Men (2007), directed by the Coen Brothers, is a desolate, violent, base story of nihilism on celluloid. Good and evil isn’t a result of who you are or what you do, but on the toss of a coin — heads or tails? Based on the novel

by Cormac McCarthy and starring, among others, Tommy Lee Jones, Javier Barden, Josh Brolin and Woody

Harrelson, we find ourselves in West Texas, where a drug deal has gone gruesomely bad and an unclaimed, bloody bag of money makes keeps the grotesque game going. 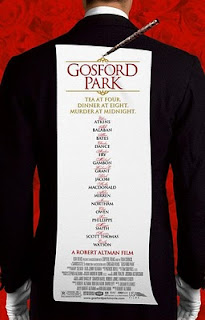 In Gosford Park (2001), we find ourselves attending a dinner party, where we are privy to the antics of the privileged class and the people who serve them. There is a murder. Directed by Robert Altman and written by Julian Fellowes (he authored Downtown Abbey), this is a story that suggests Agatha Christie, but is better than any films adapted from her books. Gosford Park is rich, stylish, subtle and sophisticated. It is a murder mystery that will be solved. The list of fine actors is too long for a short article. But among the many talents are Alan Bates, Stephen Fry, Helen Mirren, Clive Owen, Ryan Phillippe, Maggie Smith and Kristen Scott Thomas.

Leaving the theater after watching No Country for Old Men I was disoriented (not a totally foreign feeling, some might say). I didn’t feel as if I saw the movie as much as I felt the movie and was still in shock at the meaningless of it all when it was over. Actually, it wasn’t over when it was over, and that was the problem. I could not walk steadily for a few blocks, and I will never forget it. I’ve seen Gosford Park half a dozen times, not to glean new meaning or to gain greater insight into class differences , but to have that sense of satisfaction of having visited a curious time and place, and understanding how that world worked — and finally, pleasantly, having the story all wrapped up in the end. There is peace of mind in having things make sense even if, one concludes, it’s not entirely fair and that it’s probably not the way things are.

I’d watch No Country first while sipping straight tequila. Then, for Gosford Park, I’d switch to brandy, preferably having someone bring it to me as I recovered from the desolation that was and still seems to be West Texas. Having the pieces all put together in the second film might make it easier to sleep.

Posted by Ronald Tierney at 8:57 AM