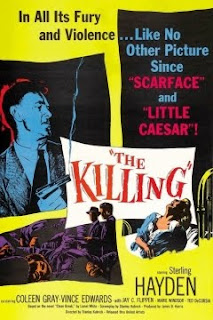 I was pretty young, maybe six, when I began riding the electric bus from Indianapolis’ Eastside to the city’s downtown on the weekends. Under the watchful eye of my older brother we would take in lunch and at least two films. Sometimes we’d see a double feature or we’d go to two of the half-dozen grand old movie theaters to extend our escape from reality for as long as we could.

I was always more attracted to adventure films — especially westerns and crime. But who was in the movie was important. I was attracted to movies starring Cary Grant, Robert Mitchum, David Niven, and Humphrey Bogart. If I saw Sterling Hayden in those days — and I must have — he made little or no impression. I understand why he didn’t make an impression then and why he is much more interesting now. His characters, while they were tough, didn’t come across smart or in control. He was a “big lug.” At 6’5”, he was big. And in the films I’ve seen he wasn’t the smartest man in the room. He was kind of a lug.

And that’s it. He wasn’t leading man handsome, but ordinary. He was never really in charge of anything. As a character, he played along with people he trusted. He had his own code, but it wasn’t set up so he could get ahead. If he made a promise, he’d keep it, whether that promise was to himself or someone else. But he wasn’t charming and sophisticated like Grant and Niven or as tough and smart as characters played by Mitchum and Bogart or Edward G. Robinson, for that matter. Hayden’s characters weren’t extraordinary. They were regular guys who seemed confused by and caught up in the system. They were, perhaps, a little too true-to-life.

The Asphalt Jungle (1950) — A weakness for the horses puts the big lug in debt. A blow to his pride causes him to borrow some money to pay off the bookie. In his own honorable way, to pay off what he borrowed from a friend means taking a job to rob a jeweler. And when it’s over, he thinks, he’ll leave the big city and go home to a happier place in Lexington, Kentucky. He’d hang around racehorses rather than bet on them — all in beautiful blue grass country. John Huston directed the film, based on a novel by W. R. Burnett, who also wrote Little Caesar. It’s an extraordinary black and white film that focuses on the layers of corruption and hypocrisy among respected business leaders, corrupt law enforcement and most certainly members of the criminal class. Marilyn Monroe has a small role in this classic.

The Killing (1956) — This is also classic noir. It was directed by Stanley Kubrick who, along with Jim Thompson, adapted the screenplay from Clean Break, a book by Lionel White. The film has Hayden in a role very similar to the one he played in Asphalt Jungle. It is another heist film, and the story follows a similar pattern. Our guy is going to do one last job and then he’s going to put it all behind him — the crime and corruption. How it ends is how it has to end. These are the rules. There is no escape. But this time it’s the ingenious heist itself that makes the movie. Stunning timing, stunning cinematography and brilliant directing.

What to drink? Cheap whiskey, probably. Not beer though. Not tough enough.