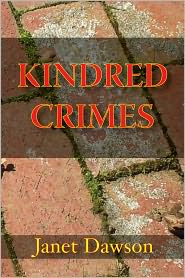 Early works by some of our best, current crime writers have been out of print for years. But times are changing. Many of these highly praised novels are available again as e-books and or trade paperbacks. “Old Gold,” is a periodic blog feature that focuses on these reissued treasures. Here's Janet Dawson’s story in her own words.

As I proofread e-book files of my backlist Jeri Howard novels, I was struck by how many of my fictional outings had their genesis in real events. We mystery writers like to have loose ends wrapped up, even if real life doesn’t work out that way.

Kindred Crimes had its roots in real-life murders in Colorado – a husband and wife killed by their son. After years of asking myself why the crime occurred, I wrote my own version of the truth.

Another Colorado crime led to Till The Old Men Die. A professor and his wife vanished. A mystery woman claimed to know what had happened to them. She never told anyone the truth, then she was confined to the state mental hospital, where she died. In my book the professor has been murdered. My mystery woman has her own agenda. The crime is solved; the real-life case was not.

I once read a newspaper article about a man in Missouri who had been killed on a public street with lots of witnesses. The dead man was so thoroughly disliked that no one would give the police any information on the shooter. This was the impetus for Take A Number, in which the murder victim was so nasty that anyone who wanted to kill him would have to take a number and get in line.

I once worked at a corporation that went through a leveraged buyout – an experience that would provide fertile grounds for murder. So I wrote Where The Bodies Are Buried – after I’d left that particular job.

For more information on award-winning author Janet Dawson, her new novel, Bit Player, and the e-book versions of her earlier classics, go here.

Posted by Ronald Tierney at 2:04 PM