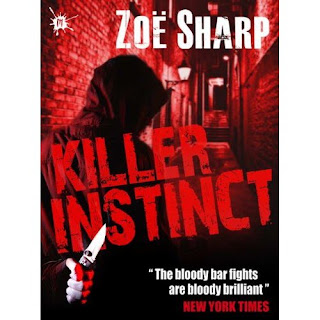 During my first few cups of coffee in the morning, I meander through various news sites on the Internet and then on to the crime fiction related blogs. After I make my first stop, RapSheet, I visit many of the blogs on their blogroll. I have a few regulars. Bill Crider’s, Ed Gorman’s, Tipping My Fedora among others. And now Murderati has become part of that ritual. Zoë Sharp, a crime writer and regular Murderati contributor, recently discussed two subjects that seem particularly relevant to my writing and perhaps to crime writing and reading in general.

The first is making early and usually out-of-print books in an on-going series available. While there are sometimes copies of these early books on Amazon or E-Bay, they may be expensive. They are rarely available electronically unless the author makes an effort to get them in that format. This often requires a bit of work. But as I mentioned in an earlier post, this work is fulfilling. In a month or two, I hope to announce the reissuing of the first four Shanahans. In the case of Zoë Sharp, she has just announced the availability of the early “Charlie Fox” series, beginning with her first, the highly touted Killer Instinct.

The second subject in her recent post was the conflict that I think both the author and the reader experiences when an author known for his or her series work writes a stand-alone novel. It’s kind of like taking a sip of a drink you thought was a Coke and you find out it was iced tea. It can be a shock. It’s hardly life threatening, but it can be disappointing if you were really looking forward to that Coke. That’s why many publishers look at a writer’s work like as a brand. Readers get comfortable with a series and they have expectations — familiar characters, time, place, tone. To change any of those requires some adjustment on the reader’s part.

This also holds true for writers of more than one series. There are ten Shanahan novels in a series that I began 21 years ago with the most recent one published last year. A couple of years ago, I began a new series, this one set in San Francisco with a whole new set of characters and a different tone. So not only have I fractured my “brand,” such as it was — and we’re not talking Coca Cola here, more like RC Cola — by going out of the comfort zone with a second series, I have also engaged in stand-alone mystery novels. Good to the Last Kiss received a starred review from Kirkus, but I have the impression that its far darker, bleaker tone is not what readers of the Shanahan series have come to expect, nor would any new readers of the Carly Paladino/Noah Lang San Francisco mysteries find even the same San Francisco, let alone the same measure of light and dark in the story telling. Selling novels that vary from the brand can be like trying to break into the market all over again.

For me, and I suspect many other writers, there is something comfortable and reassuring about returning to series characters. They are like old friends. In that sense we can relate to the reader. I found revisiting some of my earlier work to prepare text for the e-book format to be inspiring, educational and, surprisingly, fun. However, creating a new series and the standalone books allow the writer — and the adventurous reader — to really spread the wings of his or her imagination, to take a chance. And a chance it is.

If you want to read a few brief articles by other writers reissuing early books, click here for the collection of Old Gold.

Posted by Ronald Tierney at 7:49 AM