It all started with an email from the people at Magna Cum Murder who along with producing a wonderful annual mystery writer’s conference also publish a periodical for attendees. They were doing  a story in an upcoming issue. They asked a number of mystery writers who or what they they considered their muse. I couldn’t come up with one. A day or two later, it came to me — My muse is the news.  What interests me are the issues that we have trouble with. My first book 25 years ago, for example, was triggered by the onslaught of and the sad demonization of HIV It also dealt with racism. Subsequent books have dealt with similar controversies: the hypocrisy of religion as it was manifested in the sexual abuse of minors by Roman Catholic clergy; cloning; corporate bullying; discrimination against gays; and corruption in the criminal justice system.

I didn’t jump on the top of these subjects because they had been popularized by the news — “ripped from the headlines,” so to speak — but because muse-like, the news stirred my passion for fair play. The driving force for Shanahan character in the Shanahan series is his distaste for bullies.

There are two current news items that I’m not likely to write about in a book — though I wish someone would. Where is Arthur Miller when you need him?  The two stories have common threads. One is the story of the L.A. Clippers owner who unintentionally revealed some deep-seated prejudices against African Americans.  The other is the filibuster of the Senate bill passed to raise the federal minimum wage.

I feel the need to make a few statements before I proceed.  I am a capitalist at heart.  I believe in competition. If someone has a great idea, works his or her butt off and risks personal savings to create a business and it works, that person, whose responsibility doesn’t end when the shift ends, is entitled to a larger piece of the pie. But I’m not a free-market, anything-goes capitalist.  Any decent competition has rules to make sure the playing field is level. CEOs and investors shouldn’t be banking millions while the employees earn less than a livable wage.

To take the second subject first, last week Senate Minority leader, Mitch McConnell, whose personal net worth is $22.5 million, and who earns $193,400 for his job as chief obstructionist, filibustered against the law the Senate passed to raise the minimum wage. While McConnell, a Republican from Kentucky, earns $92.98 per hour on his day job, (not to mention a Cadillac healthcare policy and cushy retirement package) he thinks it’s quite all right for others to earn $7.25 an hour. This same McConnell-led group of millionaires is also anti affordable healthcare. They call for a cut in food stamps. And they are against equal pay for equal work. Women are second-class citizens in that regard. 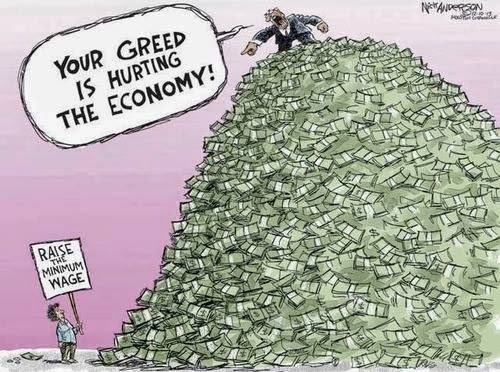 McConnell is a bully and he leads a gang of bullies, but he would never speak as directly as Donald Sterling. The Clippers owner offers a more interesting study. There’s not a sane soul anywhere who could stomach his racist remarks. But beyond that bit of ugliness, there is an underlying worldview that is troubling because of what it insinuates about American democracy.

This is what he reportedly said about his team: "I support them and give them food, and clothes, and cars, and houses," Sterling rails. "Who gives it to them? Does someone else give it to them?”  His players, through their talent and hard work do not earn their living? He gives them what they have — no doubt out of the kindness of his heart.

He continued. “Do I make the game, or do they make the game?”  I suspect he honestly believes this.  He’s done this all by himself! It’s a belief held by many, certainly not all, but many CEOs whether they run a professional basketball team or a chain of pizza parlors.

The problem is that Sterling’s entitlement thinking is the same as McConnell’s and his gang of bullying millionaires. Employers don’t have to pay fair wages. This is also the mindset that allowed the U.S Supreme Court* to say that corporations are people and, even worse, that money is speech. At $7.25 an hour, you don’t buy much of that so-called ‘free” speech.

A muse?  These two stories — McConnell’s and Sterling’s — are the tragic stories of our time.  They tell us so much, yet we do not listen.

* The U.S. Supreme Court also struck down key provisions of the 1965 Voting Rights Act because, as some judicial comments suggested, racism was a thing of the past, which suggests that at least some justices are stupid, mean, or dozing on the bench.