PARDON THE DEPARTURE FROM RANTS AND REVIEWS.  THIS IS BOOK LAUNCH WEEK!

The Blue Dragon is the first book in a new series that is part of a new and innovative imprint for readers who, for different reasons, want good, quick and easy reads without giving up quality and substance. 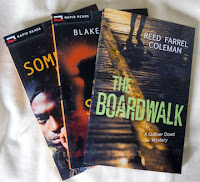 “In our increasingly fast-paced world we believe there is a need for well-written, well-told books that can be read in one sitting. Rapid Reads are short books for adult readers. They are intended for a diverse audience, including ESL students, reluctant readers, adults who struggle with literacy and anyone who wants a high-interest quick read. The Rapid Reads series includes titles by best-selling authors Gail Bowen, Reed Farrel Coleman and William Kowalski, among many others.”

”I heartily welcome this reading series to the fiction arena. Without a doubt, it fills a long-standing void. I also highly recommend The Blue Dragon as I believe it could open a rich dialogue during a book club discussion on diversity in neighborhood communities and an interesting discussion on how each person’s individual background sets the tone for their life journey. Series of this depth will also become a bridge to more challenging novels as readers progress in the development of their reading skills and grow in the discovery of the joy of reading.

I was lucky enough to receive an Advance Reading Copy of this title as an “Early Reviewer” from Library Thing.”   ‪✰ ‪✰ ‪✰ ‪✰ ‪✰

Author’s Statement About The Blue Dragon And The New Peter Strand series:

My new novella, The Blue Dragon is one of Orca Book Publisher’s Rapid Reads fall releases, and is the first in a San Francisco series that will also include The Black Tortoise in 2017.

The Blue Dragon — A murder at the Blue Dragon, a small apartment building in San Francisco’s Chinatown, prompts the absentee owner to hire Peter Strand to calm the anxious tenants. But Strand isn’t exactly what he appears to be. Neither are the tenants, who on the surface seem to be regular people going about their lives. Strand, a forensic accountant by trade, doesn’t intend to investigate the murder, but he soon realizes that this isn’t a gang-related killing, as the police believe. The murder was committed by one of the tenants. Finding out which one exposes the secrets of the Blue Dragon and brings Strand face-to-face with a few ghosts of his own.

The themes of identity and the difficulty of simply being human will remain a constant in the Peter Strand mysteries. My goal is to create short works that are accessible, entertaining and meaningful.

You can order The Blue Dragon through your local bookstore, library or on-line book retailer.