Film Pairings – For The Love Of A Woman

Here are two black & white crime films set in L.A.  One of them reflects the 1950s, the other the 1940s. Both are shot in black and white. Both are based on works by legendary crime writers.  Plot summaries would make them seem more similar than they are. 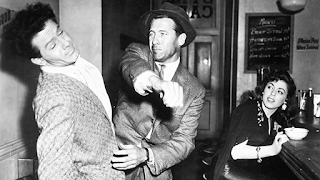 My Gun Is Quick; A friend of mine enjoyed it and thought I would too.  He warned that it was low budget.  “Well not exactly low-budget,” he said, “but another fifty bucks might have helped.” Though a little flat in the cinematography department, the film worked. Based on Mickey Spillane’s novel the celluloid rendering seemed right for the material. It was a story of a good man, private eye Mike Hammer, tempted by a beautiful woman and a bag of jewels to compromise his ethics.  One of the movie promotional posters has the temptress saying, “What will it be Mike honey? Me and a million dollars in hot diamonds or a cheap funeral?” One might fault the dialogue as clichéd until one remembers this is the original — from which clichés are made. Phil Victor directed and a relatively unknown actor Robert Bray played the legendary Hammer. Something else to keep you busy:  Count the number of 1957 Fords you see on screen. You’d think Chevys were outlawed in L.A. in the ‘50s. I think this was a fairly early example of product placement. 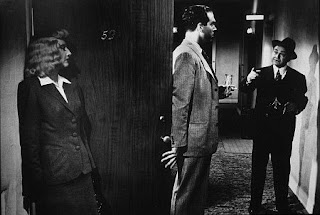 Double Indemnity: This is a different kind of story. Then again, it isn’t.  This is regarded as a masterpiece and who am I to argue?  The plot is similar. A no good woman wants some help to knock off her husband. Barbara Stanwyck seduces her insurance broker Fred MacMurray, who doesn’t quite see good and evil as clearly defined as Mike Hammer. Billy Wilder directed and worked with Raymond Chandler on the screenplay. The dialogue crackles.  The two masters, according to reports, didn't get along, but had quite a bit to work with as they brought James M. Cain’s classic noir novella to the screen. Edward G. Robinson played the savvy insurance investigator. Cinematographer John Selz showed how great black and white film could be.

The two films provide an interesting contrast in crime films. My Gun Is Quick (1957) relies completely on the strength of Spillane and Hammer and finds a way to deliver a tough but morally acceptable story. The film is simple and straight forward, almost like panels in an adventure comic book. Double Indemnity (1944) brought significant risk and resources to its project. MacMurray played against type. Robinson took third billing for the first time in his career, though he needn’t have worried. All of them made a movie in which there were no good guys, just variations on nasty. They dodged the code that made final approval by the censorship board difficult. And they turned the typical Hollywood ending upside down.

Both films could be described as hard-boiled. To accompany such tough stuff, I suggest no more than one ice cube, if that, in your glass of bourbon or Scotch. If you’re feeling a little deceitful and want to stay sober, but want your fellow filmgoers to think you’re tough as Mike hammer or Barbara Stanwyck, a little flat ginger ale would do the trick.

I just wanted to say how much I'm enjoying the Deets novels and your blog. I've just started working my way through the series, having been led to it by the article you mention in Mystery Scene. The writing is clear and crisp and I love the way you bring the characters to life. It's definitely some of the best mystery writing I've ever come across.

Also, on the subject of Donald Trump, you might enjoy the article below. It ran in Salon a few weeks back and makes about as much sense of him as anything I've come across. BTW, the same author has a piece about James Garner on his website that you might enjoy. It touches on some of the same themes as your comments not long after his death.

Keep up the great work!

Thank you. Comments like these keep me motivated. I'll check out the Salon Trump story.
Ron