Close your eyes.  Let’s travel back in time to the 1940s. And when you’re done with Tommy Guns in Los Angeles and a sharp divide between good and evil, go to New York for a glimpse of smaller-time gangsters and an abundance of angst in the 1970s. One film is an all-American shoot ‘em up. The other is American with a French twist. It’s a great contrast in filmmaking barely missing the obvious cultural clichés. 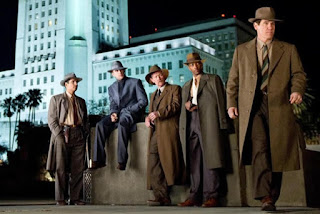 Gangster Squad – This is a graphic novel of a film – not quite to the extent of Sin City, but pretty damned close and almost as good. In this case, heroes and villains are intentionally paper–thin characters engaging in a violent, action-packed bio of gangster Mickey Cohen’s reign in Los Angeles and a dirty half-dozen gang of cops determined to take him down. Directed by Ruben Fleischer, and beautifully photographed by Dion Beebe, the movie was released in 2013.  Sean Penn (Cohen) and Josh Brolin play the main adversaries.  Ryan Gosling, Nick Nolte and Emma Stone are also among a large and talented cast. 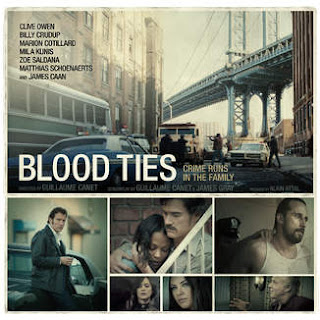 Blood Ties — Despite its blue-collar roots, the film relies on story and character as much as plot. In other words, if you are looking for an action film, you’ve come to the wrong place. This is a tale of two brothers — one a decent cop and the other a guy who just can’t walk a straight line. The family bond brings them together and their shared past tears them apart.  Both of their lives are in danger.  Love, honor and loyalty are explored in depth.  “What would you do?” is the question you are left with.  Leave it to the French influence to make you work and not tie it up in a neat little bow at the end. The film, also released in 2013, was directed by Guillaume Canet, based on Jacques Maillot’s Les Liens du sang.  Clive Owen and Billy Crudup play the brothers. Marion Cotillard, Mila Kunis and Zoe Saldana also star.  James Caan is excellent as the brothers’ father.

A little sustenance while you watch?   For Gangster Squad, pretend you are at a table at the nightclub, Slapsy Maxie’s, and order the cocktail of your choice. Shirley Temples are okay.  There’s nothing highbrow about Blood Ties (except for its philosophical questions), so break out a six -pack of something.  For both films, stay alert for new and innovative ways of saying the F-word.