Film Pairings — What Happens When You Plagiarize Yourself? Is It An Homage?


I was a Western fan before I switched to more contemporary crime fiction.  I’m thinking my first movies. They were mostly cowboys and Indians.  At some point, probably around eleven, I switched sides and stated rooting for the Indians. I couldn’t relate to Randolph Scott and Joel McCrea. 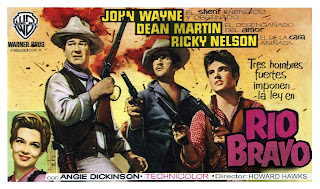 Gradually I moved from horses to cars and from the desert to urban streets. I made an exception when I was fifteen. Rio Bravo played at one of the big movie theaters in downtown Indianapolis. I’m pretty sure it was Ricky Nelson and Dean Martin that drew me to it because I didn't like John Wayne either.  He was always bossing people around. I thought Rio Bravo was entertaining but not as meaningful as High Noon, which I saw when I was eight, (and Rio Bravo pales compared to The Unforgiven). Even so, here are two John Wayne movies for the evening.  They are interesting for their similarities (understatement) rather than their differences. According to Wikipedia, director Howard Hawks was upset with what he deemed to be the un-American High Noon. Rio Bravo was the response with the blessing of the conservative superstar John Wayne. In addition to these two nearly identical films by the same director and a third attempt by Hawks called Rio Lobos, other directors were inspired by the efforts. Rio Bravo and its offspring became an inspiration for an American meme: 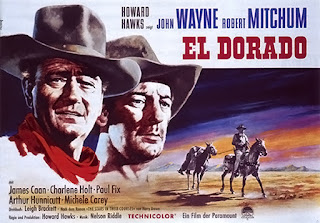 If you watch just one, I’d suggest Rio Bravo.  It also has Angie Dickinson and a sweet, little duet performed by Dean and Ricky. However, despite Dean Martin’s usually comic portrayal of a drunk most of his life, Mitchum in Eldorado gets the nod in the who-makes-the- most believable-alcoholic competition.  The evening is more fun than majesty.

Speaking of drinking… if you choose to imbibe, there’s a whole lot of whiskey drinking going on. Everybody does it.  For those who choose not to mimic the characters on screen —who also shoot people and smoke — remember we’re in the desert.  We’re parched.  How about lemonade? And one more question:  What prompted the famous director to make the same movie twice?