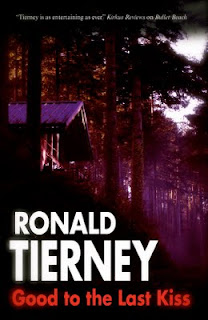 The other day I woke up to find a review of Good to the Last Kiss from Kirkus Reviews in my email inbox. My publisher sent it to me. It read, in part:

“Tierney serves up a dark, twisty little gem in which a pair of embittered detectives and a not-quite-dead victim combine irresistibly.” After a description of the plot, it continues: “Every year the genre has its Goliaths, bigger and better ballyhooed than this modest entry. Come Edgar time, however, Tierney’s well-written, tidily plotted, character-driven David of a book deserves to be remembered.” (starred)

The day before wasn’t a particularly good one. What a great start to this new one. On the other hand, even before my first cup of coffee, I was reminded how much is going on at the moment. There is an odd confluence of publishing dates. Severn House just officially released Good To The Last Kiss (hardback). At roughly the same time the London-based publishers also released both Bullet Beach (A “Deets” Shanahan mystery) and Death in North Beach (a Carly Paladino and Noah Lang mystery) in trade paperback and e-book formats. Bless them.

Add to the mix, my own undertaking, which is to take advantage of the opportunity new technology has presented. Like many other writers, I’ve decided to do a little self-publishing. The first from Life, Death and Fog Books, is Mascara, Death in the Tenderloin. One of the reasons I’m taking this precarious step on my own is because novellas aren’t welcomed in the world by traditional publishers. Unfortunately for me, it is the form I enjoy the most. Most publishers of mysteries want 80,000 words minimum. Mascara came in at half that number. If I fattened it up, I would have screwed it up. So I didn’t.

For me, the novella is a perfect in-flight length or a pleasant evening away from the computer and TV, and about the same number of words as the early private-eye novels. But the downside is serious. Mascara will likely suffer from lack of public notice. Not only will it be ignored by bookstores, even the independent ones, because it is author published, it is not likely to be reviewed either. I understand why and I’m definitely not complaining. It’s simply a fact to be reckoned with (or with which to reckon).

A short message for fans of the Paladino/Lang’s San Francisco mysteries, Mascara is not part of the series, but it is a prequel of sorts, and reveals some secrets about a younger Noah Lang and his savvy and lovely gender-bending pal. My own review of the book is: I think it is a good, quick read. NOTE: For a related story on the Mascara experience, check out this story on the blog, Rapsheet.

Now, back to the regularly scheduled programming — a new San Francisco bookstore profile on Wednesday (Browser Books) and a new double feature movie recommendation on Friday. And maybe some surprises.

Posted by Ronald Tierney at 8:18 AM