OLD GOLD — Paul Levine's Jake Lassiter, How It All Began 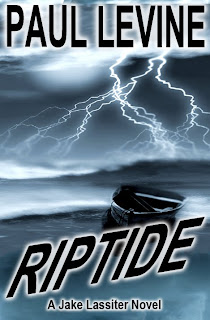 Early works by some of our best, current crime writers have been out of print for years. But times are changing. Many of these highly praised novels are available again as e-books and or trade paperbacks. “Old Gold” is a periodic blog feature that focuses on these reissued treasures. Here's the story in the author's words.

Many years ago, I rented a condo on Maui for the summer, intent on polishing my skills as a competitive windsurfer. My second day at Hookipa Beach, bouncing over the lip of a roller, the board exploded out of the water and smashed my femur. The ER physician told me nothing was broken and recommended smoking a little Maui Wowie for the pain. (No, not Dr. House).

So I sat on the beach with a yellow pad and started handwriting a novel featuring a character that popped into my mind: linebacker-turned-lawyer Jake Lassiter. Here’s the first sentence of fiction I ever wrote, (not counting certain statements in my appellate briefs). “The old man loved gadgets, money, and large-breasted women, and at the moment, he had all three.”

When I returned home to Miami to resume practicing law, I put the novel aside and wrote To Speak for the Dead, which became my first published book. I kept re-writing Riptide, which appeared as a William Morrow hardcover under the title Slashback. And that line about gadgets, money, and breasts? It’s now the first sentence of chapter two. Here’s what the Tampa Tribune had to say:

“A thriller as fast as the wind...a bracing rush, as breathtaking as hitting the Gulf waters on a chill December morning.”

There’s more about the Jake Lassiter series on my website, including info about Riptide, in which Jake Lassiter chases two dangerous professional windsurfers from Miami to Maui in pursuit of the old man’s stolen bonds. You can buy the e-book from Amazon Kindle, Barnes & Noble Nook, and Smashwords. — Paul Levine

Posted by Ronald Tierney at 8:55 AM