Film Pairing — The Humor of Hit Men in Exotic Places 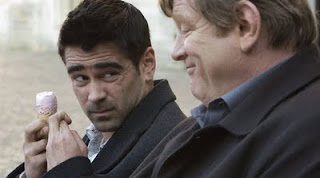 If you can’t separate Pierce Brosnan from the stylish bordering on the silly Remington Steel or his not quite so silly, but enduring James Bond, you might want to give him a chance to impress you. His performance as a world traveling hit man on the skids is worth the price of admission all by itself. The kill or be killed man on a mission in The Matador (2005) is Brosnan’s character. He meets and is befriended by a down-on-his luck businessman, played by Greg Kinnear. The hit plays second fiddle to the interplay between these two unlikely pals. A highly unexpected and entertaining hour and a half.

The Matador is a perfect set up for a darker and perhaps even funnier In Bruges (2008). This time a couple of professional hit men — Colin Farrell and Brendan Gleeson — are forced to take a little R&R in Belgium, where they do not appreciate being in Bruges. Neither the city’s architecture nor the tourists who have come to admire it impress the two criminals. What one of them doesn’t know is that their painfully boring time off is about to take a nasty turn. Their boss, Ralph Fiennes, has ordered one of them to kill the other. Note to film buffs: Stay Alert. In Bruges is rife with subtle and not quite so subtle visual references to other films.

Together these two movies can be a great Friday night escape. However, as Poirot reminds us, we shouldn’t confuse Belgium with France. Therefore, we’re not uncorking any wine. It is a beer night again. Chimay can be found at any store selling fine spirits. But there are hundreds of Belgium brews.

Posted by Ronald Tierney at 7:20 AM