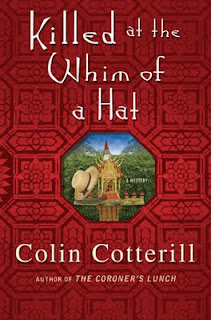 Just as crime readers’ tastes may vary from cozies to horror, there are favorite locales as well. In recent years, murders in cold, dark Scandinavian countries seem to have exploded on the criminal landscape. My brother has taken a sudden and almost obsessive interest in what dark things happen in Istanbul. I’m drawn to stories that take place in Thailand.

A good portion of the most recent Shanahan book, Bullet Beach, is set in Thailand. The Bangkok and Phuket setting was very important to me. But because my understanding of what it means to live in Thailand is as shallow as an urban puddle, the story is told from the point of view of someone visiting for the first time. This is a valid and possibly interesting point of view. I hope so. However, readers who seek a deeper understanding of the nature of the country they will inhabit for 300 or so pages will find their expectations met by reading John Burdett, Timothy Hallinan and now Colin Cotterill. Though not Thai themselves, they have lived in that part of the world and have developed an intimacy that a mere Western traveller cannot. Oddly and wonderfully enough, though, these three don’t write about the same Thailand.

I was first introduced and seduced by books set in Thailand by Alex Garland’s The Beach. Garland wasn’t creating a series, though — simply a fine book. So, where was I to get my fix? When I was told about Burdett, I jumped into his first Thai-related book immediately. Unfortunately, Burdett doesn’t write fast enough for me. Just in time, I was introduced to Hallinan and his Poke Rafferty series. Completely different. It took me a while to adjust to this other Thailand. Soon, I became addicted to this new drug. Unfortunately, even the combination of Burdett and Hallinan couldn’t deliver stories fast enough. Now, I’ve found Cotterill’s first in what is most likely a new series — and his very different Thailand. Perhaps now, there will be a sustaining flow of stories. But whose Thailand is the real one?

For me, Burdett captures his reader by using the spiritual, if not the dark side of that Thai spirituality, to cast his mystery. Ghosts and superstition play regular roles in what seems to me to be the most haunting of the three approaches. (Vulture Peak, the fifth in the series, will be released in January 2012.) From this fan’s point of view, Hallinan’s books present a more tangible danger. The evils here are more earthly than Burdett’s and they appear to surface in the midst of or as a result of social injustice and corruption. His main character’s family is at the center of his stories. When Rafferty’s family is threatened — and they are, of course — we care and we keep turning the pages until they are safe. (The Edgar-nominated Queen of Patpong is Hallinan’s most recent.) If Cotterill’s first in his new Thai series, Killed at the Whim of a Hat, is any indication of what’s to come, we are going to experience a more whimsical Thailand, though no less deadly. There is humor throughout his lively, song-like prose and in the creation of wonderfully, quirky and entertaining characters.

Perhaps that is why I’m so taken with Thailand as a setting. It can be seen in so many different ways — all of them fascinating.

P.S. It should be noted that another veteran writer of crime novels set in Thailand is the internationally read Christopher G. Moore, though until now he’s been comparatively invisible in the US. I’ve not yet had the privilege of reading any of his books. Asia Hand, recently released in the U.S., features private eye, Vincent Calvino. The book has just been nominated for a Shamus Award for best Paperback Original. Someone else to add to the list.