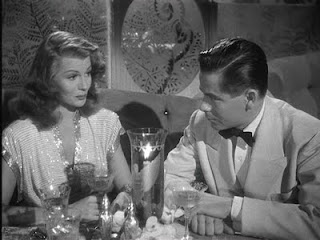 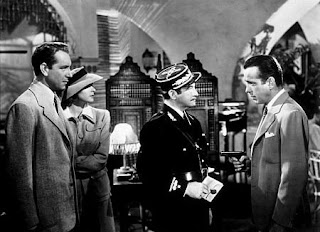 When the love of your life breaks your heart, you never want to see her again. You become cynical, tough — nothing to lose because you already lost the most valuable thing in your life. So you either open a casino or go work in one, right? That’s what Humphrey Bogart does in Casablanca. It’s also what Glenn Ford does in Gilda.

The women, Ingrid Bergman as Ilsa and Rita Hayworth as Gilda, inadvertently happen upon the nightclubs of the guys they jilted. More bad luck, so do Nazis. Danger lurks in Casablanca where Bogart and Bergman fight against their impulses. It also lurks in Buenos Aires, where Ford and Hayworth try to hate each other.

I couldn’t help being a little flippant here; but of course, we’re dealing with a genuine classic with Casablanca (1942). Bogart is accompanied by his Maltese Falcon mates from a year earlier — Peter Lorre and Sydney Greenstreet. He is also sharing the big black and white screen with Claude Rains and Paul Henreid. With Bergman, this is a first-rate cast. The movie, directed by Michael Curtiz, is a tight and cinematically elegant story set against the advancing Nazis. The chances are that you know all of this. There are few people left who haven’t seen the movie at least once. And it’s likely to be on just about everyone’s ten best list.

Lesser known is Gilda (1948), but only slightly. Like Casablanca, the cinematography is . . . well . . . stunning. Though Glenn Ford does a great, cocky tough guy, Rita Hayworth is Gilda and pretty much the movie. She is not at all like Ilsa who suffers in silence. Gilda hides her suffering as well, but is hardly quiet about it. She pretends to be a brazen, brassy (use another “b” word here). This big budget (for its time) film was directed by Charles Vidor. It must have knocked post-war audiences out of their seats.

Paul Henreid and Ingrid Bergman drink a lot of champagne at Café Americain in Morrocco. They also drink Cointreau, Brandy and Cognac. If you are leaning toward Gilda, the Argentinians make great wine. Cheers. And thanks to Baby Dave for the tip.

Posted by Ronald Tierney at 8:41 AM