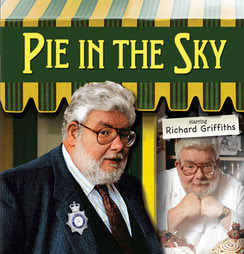 My top pick for the best television crime drama ever is easy — the mind-blowing, hyper-real American series, The Wire. Has there ever been anything better? I was also very fond of the DaVinci Code and recently the slightly retro George Gently. Earlier I was fixated on Homicide: Life on the Street and Prime Suspect. What all of them have in common is that they are grounded in reality. On the other hand, I watched all 19,000 episodes of Midsomer Murders, as light and silly as they often were.

Somewhere on the light side, but not quite as lightly or redundantly on the village green as Midsomer, Pie in the Sky provides us with a smart, honorable homicide detective, who, when he can, is a smart, talented chef. If it is not the murder investigation that holds the viewer’s attention, it’s the sitcom in the kitchen of Pie in the Sky, a restaurant dedicated to fine English cuisine. (Pause for those who are determined to laugh) The combination is golden, though I admit, it took a couple of episodes to begin to appreciate the premise and warm up to what turned out to be an excellent cast.

Netflix tells me there is a long wait before I receive the first episodes of the series’ fifth and final season. I could spend that time sorting through recipes for steak and kidney pie. But that’s not likely. For capsule opinions of other rentable British series, go here.

Posted by Ronald Tierney at 8:19 AM