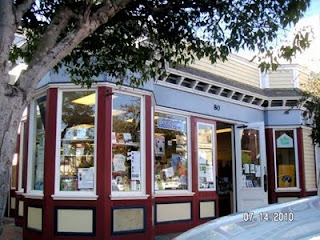 It’s essential that just about any of San Francisco neighborhood worth its salt, have a bookstore. And for the most part, the many great city neighborhoods do. So it becomes a matter of neighborhood. I would contend that, unlike any other, if you were dropped in the middle of the West Portal village-like main street you wouldn’t know what state, let alone what city, you were in.

This is not because there is an abundance of chain stores that makes it indistinctive from others. There are few, if any, national chains. On the other hand, there seems to be a lack of San Francisco’s wonderful weirdness, quirkiness, or even a cultural definition that one might find in Bohemian North Beach, the Hispanic-oriented Mission, or the young, upscale Marina. West Portal’s main street, which appears to serve the affluent neighborhoods of Forest Hill and St. Francis Wood as well as Ingleside, is filled with independent stores that provide products and services — everything and anything you might need — in a plain and practical manner.

One of the most important products (and services) West Portal offers is a book store, simply, and given the neighborhood, not unexpectedly called the “Book Shop.” It is a few blocks from the junction of Muni’s K, L and M Lines as they emerge from the tunnel underneath Twin Peaks. The Book Shop, a family-oriented store, garners tons of praise from Yelp reviewers, who invariably compliment staff on their friendliness and knowledge. In addition to books — all new — they have active programs — yoga and knitting classes and frequent author-related events. It can’t help but be a, perhaps “the,” center for West Portal community activity.

Posted by Ronald Tierney at 7:47 AM