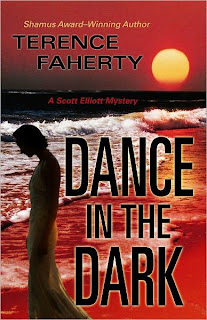 Sometimes a great series character slips from the limelight. Sometimes we are fortunate to witness their return. “Old Gold,” in addition to featuring reissued crime classics from current writers, looks at new releases featuring the resurrection of classic characters. Here's the story in the author's words.

Writing Dance in the Dark, the fourth novel featuring my Hollywood historical PI Scott Elliott, was a return to familiar ground for me. Before I started the book, in the fall of 2005, it seemed as though the Elliott series would end as a trilogy, at least as far as novels were concerned. I was having some success with Elliott short stories (reprinted earlier this year in a collection called The Hollywood Op), but the most recent novel, 2000's Raise the Devil, had disappeared with scarcely a ripple.

Then in 2005, Jim Huang's small press, The Mystery Company, brought out a stand-alone novella, In a Teapot, which garnered some nice review attention and received the series' third Shamus nomination. That encouraged me to start another Elliott novel. I wanted to get him to the wild Altamont concert of 1969 (or a reasonable facsimile of it) and I'd been kicking around a plot idea that would do it. The writing took a long time — ten months for a first draft — because I interrupted the process four times to write short stories.

Once completed, Dance in the Dark spent a while making the rounds before finding a home with Five Star, but I'm very pleased with the resulting book, especially its haunting cover. One reviewer wrote of the novel's "valedictory sadness," which may reflect the fifty-something Elliott's sense of things falling apart. Or the book's fifty-something author's sense of it. If Elliott knew what lies ahead for him and Hollywood — disco — he'd be even bluer. — Terence Faherty

Posted by Ronald Tierney at 8:07 AM