San Francisco Bookstores — Alexander Book Company, Downtown, And Then There Was One 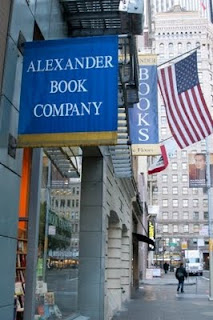 Watching the demise of San Francisco’s downtown bookstores was like watching Agatha Christie’s And Then There Were None. After Rizzoli’s led the decline by abandoning the city a few years ago, two downtown Borders were boarded up and another South of Market store closed. Cody’s fled, Stacey’s retired and the Virgin Store slipped away. Would Union Square and the financial District area be left to linger in illiteracy? No. There is the Alexander Book Company, on the quiet side of Market (at Second).

It is a deceptively large store with perhaps a too modest street presence. What might have been the least visible of downtown bookstores, The Alexander Book Company, turned out to be the most enduring. It has weathered the murderous anti-brick and mortar climate. And the store has plenty to offer — 50,000 books on three floors. It has a strong student following especially for those studying graphic arts. They have a broad collection of African-American literature and a large section devoted to children’s books. And few will be disappointed in the selection of best sellers — new fiction and nonfiction. They also have an interesting selection of remainders and an eclectic collection of magazines.

The neighborhood is about as urban as it gets — on the edge of one of the world’s most famous shopping districts and in the midst of God knows how many Pacific Rim corporate headquarters, The Alexander Book Company is now the only place to look for books downtown. They are also on the edge of SOMA and its restaurants and museums. Downtown living is on the rise as well — literally. Construction of condo towers continues despite the uneasy real estate climate; so a whole new group of residents will find the store a safe haven from the fast pace that surrounds them.

Posted by Ronald Tierney at 7:30 AM