Film Pairing — Take Two, Dark, Foggy, Hilly and Dangerous Trips to San Francisco With Mr. Bogart and See Me in the Morning

Themes we are embark-ing upon — 1940s Noir Classics, Humphrey 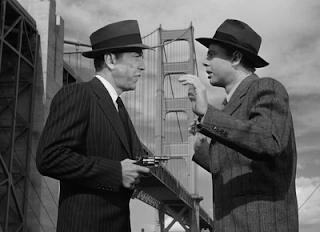 Bogart and the City by the Bay. All right, there’s nothing novel about a double feature with The Maltese Falcon (1941) and Dark Passage (1947) but we’re creating a mood here and we’re doing it in San Francisco.

The Maltese Falcon is often regarded as one of the best films ever made, usually after Casablanca, Citizen Cane and The Third Man. And it may very well be: A plot that twists, a clever protagonist, and an end that goes against the standard Hollywood formula. Surely I’m not going to spoil anything by saying the girl, the love interest, comes to a bad end.

There is a quick intro featuring San Francisco landmarks in The Maltese Falcon. However, once the film begins, its clear the movie could have been filmed anywhere. In Dark Passage San Francisco plays a significant role. Anyone who lives here knows what Bogart’s character, post surgery, felt like climbing and climbing and climbing these damned beautiful hills. Overall, the cinematography in Passage may actually be better than in its more famous counterpart. The innovative first-person cinematography as the film opens is odd, but effective. Bogart’s grit and Lauren Bacall’s elegance create more heat, light and magic than Bogart and Mary Astor. Another plus for Dark Passage.

In my mind though, while these are both excellent films the nod goes to the Maltese Falcon because Sam Spade has more formidable opposition in this one. Sydney Greenstreet is a superb heavy, pardon the play on words, and Peter Lorre seems to steal every scene he’s in. It is their challenge — as actors and characters — that elevates Bogart’s classic portrayal of a cynical private eye and therefore his bittersweet victory.

They are both must-sees. I’m not quite sure what the Fat Man offers Spade that knocks him out. I suspect that whatever drug he used was slipped into a glass of Brandy — not a bad choice on a foggy San Francisco night. Just skip the Mickey Finn part. And if you are not in San Francisco, pretend you are for a few foggy hours.