Film Pairing — The Fame Game, The Seamier Sides of Hollywood and Broadway 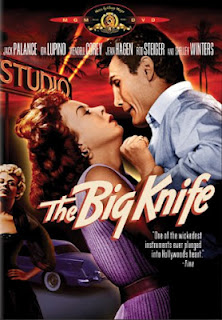 When I watched the two films I’m recommending I was trying to find a couple of the great old black and white films with tough guys, dark alleys, the kind of 50’s comic-book crime films that were comforting in their predictability and provide a little escape from reality. Sometimes I’m just in the mood for the mood. Sometimes, though, I’m fooled. The description or the movie poster doesn’t really get it right.

This was especially true of The Big Knife. The name said that its going to be a rough ‘em up black and white film. After all, it starred Jack Palance and Ida Lupino. That’s not what happened. What I found was a story that was a little larger in scope than what I expected and incredibly better written. The Sweet Smell of Success came highly recommended by another mystery writer and I found it to be the movie he said it was. And, as it turned out, the two were a perfect match. But it wasn’t until I did a little further research that I understood the relationship one had with the other.

Both The Big Knife (1955), an adaptation of a Broadway play, and Sweet Smell of Success (1957) were based on the words of American playwright Clifford Odets. He didn’t have kind things to say about what went on beneath the surface of the great white way and behind the private gates of Hollywood.

The Big Knife tells the story of a popular film actor whose dark secret was covered up by studio big shots, essentially saving his career and a lifestyle to which he had become accustomed. The actor, who always portrays the strong, principled hero, must pay the price, however. And the price is his freedom. He is now just another studio puppet, a rich one, but a puppet nonetheless. He is neither the man he portrays on screen nor the man he used to be. The cast is stellar. In addition to Jack Palance, Ida Lupino, who played against type, there was Wendell Corey, Rod Steiger, Miss Shelley Winters (as she was uniquely designated in the credits), Jean Hagen and Everett Sloane. The action all takes place inside the actor’s luxurious Beverly Hills home, revealing the film’s theatrical roots. 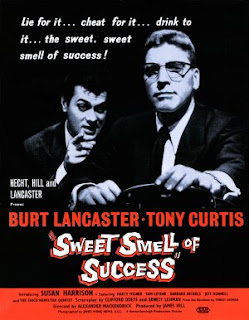 If The Big Knife is good — and it is — The Sweet Smell of Success is better. Minus the touch of melodrama that affected The Big Knife, this film exposes a nasty, overbearing New York gossip columnist who could make or break a celebrity’s career and a Gollum-styled agent who would do anything to get his clients in the papers. The two combine to control the life of the columnist’s younger sister — for her own good, of course. Burt Lancaster masterfully undertakes the role that at least spoke to the kind of power real-life columnists like Walter Winchell held over the lives of others. The late Tony Curtisplayed the slimy agent, showing anyone who might have doubted it that Curtis was an actor of the first order. Martin Milner played the object of cold-blooded, malicious rumor.

The two films, together, provide a glimpse at the underbelly of the entertainment world. Broadway and Hollywood are, in many ways it seems, not so different or at least weren’t so different in the mid fifties.

The evening demands cocktails. This is the sophisticated 1950s. Rum and Coke for the ingénues and Martinis for the tough-minded. Most of us probably fall somewhere in between

Posted by Ronald Tierney at 8:33 AM